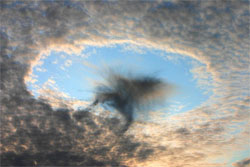 It is not uncommon for the appearance of disc-shaped clouds, known as lenticular clouds, to result in UFO reports. The unusual appearance of these clouds leads some to conclude that what they are seeing is a cloaked UFO.

Another type of cloud-related phenomenon that some believe results from cloaked UFOs is known as hole-punch clouds. A October 2009 occurrence of a hole-punch cloud was videotaped in Moscow and picked up by media sources around the globe. But a new study led by Andrew Heymsfield of the National Center for Atmospheric Research claims to have found an explanation for this strange phenomenon.

This research determined that hole-punch clouds are likely caused by airplanes taking off or landing. According to Heymsfield, “Any airplanes, whether jet or propeller, can make these things.”

The results of the study appeared in the Bulletin of the American Meteorological Society.