Multiple strange lights were observed in the sky above Tucson, Arizona on Saturday night, which reminded witnesses of the well-known "Phoenix Lights." 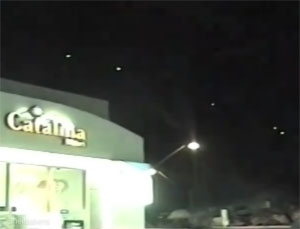 Multiple strange lights were observed in the sky above Tucson, Arizona on Saturday night, which reminded witnesses of the well-known “Phoenix Lights” mass sighting that occurred in 1997.

Tucson resident Sheila Martin was able to capture video of the mysterious lights, and she described seeing at least four lights moving from south to northeast in a boomerang formation. KGUN9, the local ABC affiliate, interviewed Martin, as well as others who witnessed the lights. One witness claimed to have seen as many as sixteen lights in the formation at one point. Another witness saw the lights in what he described as a trapezoid formation.

As they have done with UFO sightings in the past, KGUN9 consulted astronomer James McGaha to get his opinion on the latest lights in the sky. McGaha quickly concluded that the lights must have been flares in the sky, and certainly not a UFO or UFOs. But can his reasoning hold up to scrutiny? He explained to KGUN9, “You have to ask the question: if an alien spacecraft is going to fly here through thousands of light years to get here, are they going to turn their lights on at night?” A reasonable answer to this posed question is, “Why not?” Humans put lights on air ships. Why would distance traveled have anything to do with whether or not lights are on a space ship?

Regardless of whether extraterrestrials do or do not utilize lights on their craft, McGaha’s theory is weakened further by the fact that a spokesperson from Davis Monthan Air Force Base told KGUN9 that they did not launch any flares at the time the mysterious lights were in the sky, nor did they have any idea what the lights were.