Some of the cast and crew of the new Star Trek movie, Star Trek Into Darkness, got a chance to speak to some astronauts via Google+ Hangout. The movie’s producer and director, J.J. Abrams started off the questioning asking if they had seen anything strange that makes them believe in aliens. Although the astronauts said they hadn’t, one of the stars of the movie, Alice Eve, says she was not convinced.

Abrams was not able to participate in the live event, but he started off the questions with a video that was recorded earlier. He asked:

I wish I could be there, but I couldn’t attend, so I am doing this very important question on video, which is the following. I talked to an astronaut once who told me on one of his missions he actually did see something really strange that he couldn’t explain that made him believe in extraterrestrial life, and my question to you is. Have either of you ever seen anything that made you believe that, or something you couldn’t explain or couldn’t understand, that you didn’t really necessarily share with the public, but that you want to share with us now? Thanks. 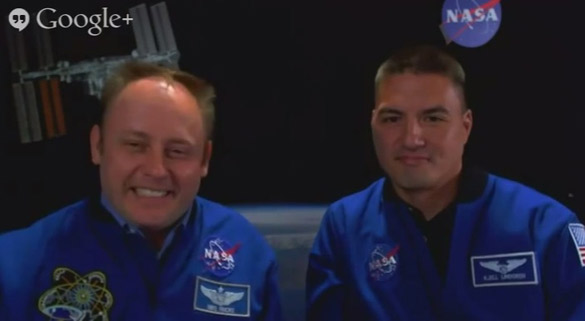 That was a great question from J.J., we get that question a lot. We all want to know, ‘are we the only ones out there?’And Star Trek helps us imagine what it could be like if there were other creatures, other people, other species. I spent a whole year in space, 381 days, but it is only 240 miles up, so that’s not very far in cosmic terms. So we think as we go farther out, and into the universe, we might find something out there that we don’t know about. I have never seen anything, maybe Kjell will on his mission, but I think as we go farther out, with the inspiration we get from you guys making these great feats of imagination and excitement, the movies that you make,  inspire us to be our best as human beings on planet earth.

Everyone laughed and got a kick out of the question and the answer, Lindelof commented, “What a great answer. Mike, can you confirm you have not been taken over by aliens? It felt a little too polished.”

Fincke said, “No, I have done this before and I am an American human being who loves being part of our space program, and we all look up to you guys to inspire us.”

To which Lindelof replied, “Now we know something is seriously wrong.” 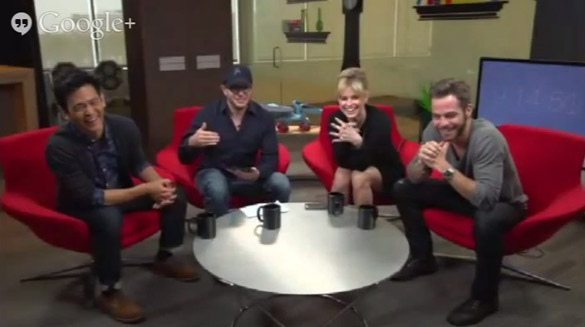 The spirit of the conversation was light and fun. The Star Trek members repeatedly commented on what a thrill it as to be talking to the astronauts, especially one in space. 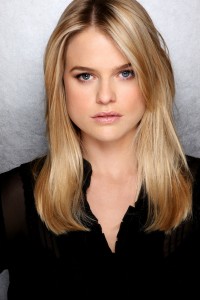 On an appearance on Jimmy Kimmel Live, Eve told Kimmel:

That was definitely the coolest thing we’ve done. I mean, we’ve shared the movie with countries around the world, but we got to Skype… with the guy in a space station. And he was turning around in the air when we were talking to him and when he would talk, he would suddenly let go of his mic and it would just stay there. It was a very weird experience.

J.J. asked this question, ‘So have you seen alien life?’… and the response that the guys at the NASA base gave us… was so rehearsed and so clear that they had seen (aliens).

She then nervously said she thought she might get abducted for saying this. Kimmel respond  “Interesting, so you believe there is a party line that they are given, and they kind of have to regurgitate it.”

Kimmel, obviously enamored by the beautiful actress, asked if she believed in aliens, she said she did and he quickly responded, “then I do too.”

While Eve is not convinced the astronauts are telling the truth, another interesting question would be who Abrams spoke to, and what did the astronaut see to convince him of extraterrestrial life? If any of you happen to bump into him, be sure to ask.