With the recent successful solo flight of Virgin Galactic's SpaceShipTwo, the reality of space tourism is getting closer. 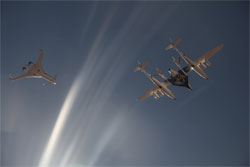 With the recent successful solo flight of Virgin Galactic’s SpaceShipTwo, also known as the VSS Enterprise, the reality of space tourism is getting closer. Virgin Galactic already has a waiting list (370 names long) of people wanting a seat on a future space flight – people who have already paid deposits for their $200,000 ticket. The company expects to begin offering commercial flights to space in 2012, but Virgin Galactic is not the only company in the space tourism game.

In September, Boeing and Space Adventures Limited announced plans to market low Earth orbit commercial rides aboard a Boeing capsule that is currently in development. The two companies see a market for taking tourists into space, and they are initiating competition in the new market by charging half as much as Virgin Galactic for tickets. Boeing is aiming for launches by 2015.

Both Boeing and Virgin Galactic ticket prices are a steal compared to what Russia charges private space tourists – $40 million for a ride into space to spend a few days aboard the international space station.

There are sure to be many more companies entering into the booming space tourism market. Budget Suites owner Robert Bigelow, PayPal co-founder Elon Musk and Amazon.com’s Jeff Bezos are just a sample of wealthy business owners funding technology developments for space travel and/or life in space.

National Geographic will air a documentary tonight about Virgin Galactic and their space tourism push.