Orange balls of light were seen by several people over Phoenix, Arizona on Easter Sunday. A couple of those witnesses caught the objects on video.

Arizona’s 12 News interviewed Peter Perez, who says he and his family saw the objects just before sitting down for Easter dinner. Perez says his step-father saw them first and called the rest of the family over to take a look.

The story on AZCentral.com says the sighting took place on Saturday. However, Perez says it was Easter, and later in the story, they mention the sighting was on April 5, 2015, which was Easter. The Saturday thing must be a mistype.

Either way, Perez says it was about 8:51 pm when his step-father pointed out the lights.

Perez says they saw a “fleet” of orbs over the horizon. He estimated there were about 18 to 20 amber-colored orbs. He told 12 News, “We were in awe.” 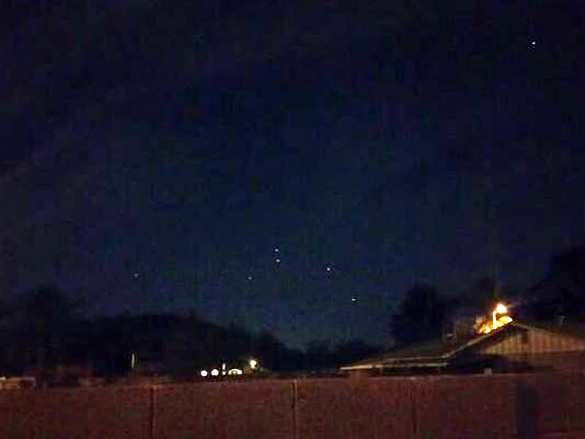 Perez said the area they came from was obstructed from his view.

According to Perez, the lights hovered in a group, stationary, for a minute before moving off to the west and disappearing from view. After losing sight of the objects, Perez stayed outside for a few minutes. He then saw a second group of lights moving similar to the first.

Perez said the second group was smaller, about 10 lights, he estimated.

Perez caught a few seconds of video, which can be seen above.

12 News talked to a second witness, but that witness wanted to remain anonymous. This witness also took pictures, but they were not provided in the 12 News story. However, Perez was able to look at them, and he says they were similar to what he saw.

Perez says he does have an interest in UFOs. He told 12 News, “It’s always been something that’s intrigued me, but I’m not a UFO hunter or anything.”

Another witness to the lights is a bit more of a UFO Hunter. YouTuber TimTheBall posted video of the lights he says he captured on Easter Sunday at about 9:05 pm. He has several other UFO videos posted on his YouTube page as well.

TimTheBall writes in his video’s description: “This video was shot from the top of my car in my driveway in Glendale, AZ. whole valley as they vanished one by one. When I looked back west, I was astonished to see a new cluster of lights, also on the move across the valley toward the east, and also burning out one by one. I have no idea what they are, but I do not believe these are flares, as they crossed the entire valley sky. When you see each cluster appear, my camera was pointed toward the far west valley. They were vanishing from sight when my camera had panned all the way to the east. They went from a dead float to a quick acceleration.”

12 News asked viewers who may have seen the UFOs on Easter Sunday to comment on their Facebook. At least one other witness was convinced that what she saw were Chinese Lanterns. Many agree. Similar comments have been made on TimTheBall’s YouTube video.

TimTheBall disagrees. He responded to the YouTube comments, saying: “Chinese lanterns do not go from a dead float, to a horizontal acceleration, crossing at least 50 miles of city in 2 minutes.”

Chinese Lanterns can look strange. They can go from a slow pace to a fast one if caught by the wind. They also are often amber in color, and they are used most often on holidays, like Easter.

However, another alleged witness who responded to TimTheBall’s video, writes: “Chinese lanterns do not fly at speeds outpacing helicopters capable of speeds of 120 mph., plus Easter Sunday the wind was not present at all, not even enough [wind] to move a 50′ flag….NOT Chinese lanterns people.”