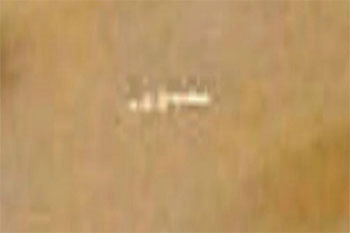 David Martines, a self-described “armchair astronaut,” stumbled on what he believes to be a physical structure on the surface of the red planet while browsing Google Mars, a free web-based map program that contains a compilation of satellite images.

Martines named the supposed structure Bio Station Alpha, and provided the location coordinates of 49’19.73″N 29 33’06.53″W in a video he posted on the Internet. He describes it as being more than 700 feet long and 150 feet wide, and appearing to be “a cylinder or made up of cylinders.”

Here is the video of Martines showing what he discovered:

This isn’t the first time that someone has claimed to have discovered some type of structure on Mars. But in previous instances, the objects or “structures” in question have had more rocky, or natural, appearances. But Martines’s Bio Station Alpha appears to be a more artificial, rectangular structure.

While the image of the Martian planet’s surface that Martines highlights in his video is interesting, some scientists have offered an explanation for this anomaly. Alfred McEwen told Space.com, “It looks like a linear streak artifact produced by a cosmic ray.” McEwen is a planetary geologist at the Lunar and Planetary Lab at the University of Arizona, director of the Planetary Imaging Research Laboratory, and the principal investigator of the High Resolution Imaging Science Experiment (HiRISE), a powerful telescope currently orbiting Mars. Space.com further explains:

As a cosmic ray passes through a camera’s image sensor, it deposits a large amount of its electric charge in the pixels that it penetrates. If the particle passes through at a shallow angle to the plane of the camera, it affects several pixels along its path. The result is a bright streak on the image.

Theoretical physicist Michio Kaku also came to the conclusion that cosmic rays are likely the cause of the anomaly. He offered this explanation on the Fox News show America’s Newsroom:

At the present time, there isn’t really any way to know with 100% certainty the true nature of the object in the image in question. Mars surface exploration missions are currently in the works, and those could eventually provide additional answers. But for now, the opinions of scientific experts are the only “official” answers to the mystery.

Search the surface of Mars at http://www.google.com/mars/