New data from the European Southern Observatory’s HARPS planet-hunting telescope suggests there could be ten billion Earth-like planets in our galaxy.

New data from the European Southern Observatory’s HARPS (High Accuracy Radial velocity Planet Searcher) planet-hunting telescope suggests there could be tens of billions of Earth-like planets in our galaxy.

Astronomers analyzing this new data estimate that approximately forty percent of red dwarf stars in the Milky Way galaxy may have Earth-sized planets orbiting them with the right conditions for life. Red dwarfs constitute nearly eighty percent of the stars in the galaxy, and, according to Wired.com, their pervasiveness means “that there are tens of billions of possible places to look for life beyond Earth, with at least 100 such planets located nearby.” 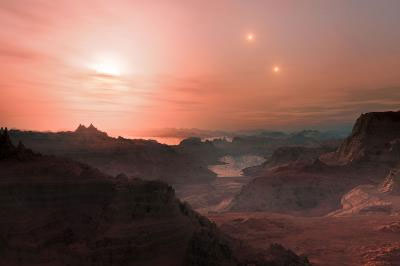 During this recent survey of red dwarf stars, scientists discovered a planet in the Gliese 667 triple star system. This is the second planet discovered in that system, and has been named Gliese 667 Cc. The planet is situated near the center of the habitable zone, and, according to astronomers, it “almost certainly has the right conditions for the existence of liquid water on its surface.” Gliese 667 Cc is the second super-Earth planet located in the habitable zone of a red dwarf star discovered during this HARPS survey. The first was Gliese 581d, which was confirmed in 2009.

With more information coming in from ESO’s HARPS and NASA’s Kepler space telescope, and current data continuing to be analyzed by astronomers, incredible discoveries about our galaxy are sure to become more common. Each new discovery helps us learn more about our mysterious universe, and, perhaps, brings us closer to finding extraterrestrial life.