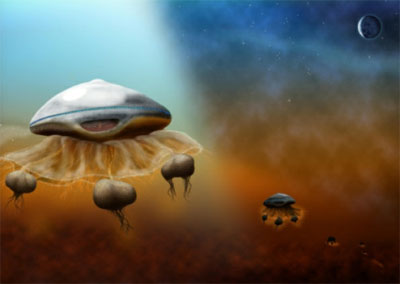 British scientist Dr. Maggie Aderin-Pocock is the researcher who recently suggested that aliens could look like giant jellyfish. This satellite expert, government adviser, and leading scientist at European space company Astrium, described her theory on United Kingdom TV channel Eden as part of Science Month. She explains, “My vision of aliens is an inhuman, silicon-based life form that looks much more like a jellyfish than sci-fi’s little green men.”

She imagines aliens that drift through methane clouds scooping up chemical nutrients into their mouths. The creatures could also be able to live off light taken in through their skin, says the scientist. The alien jellyfish – which Dr Aderin-Pocock imagines could be the size of a football field and have an orange underbelly – would be generated from silicon as opposed to carbon, which is the basis of all life as we know it. The orange underbelly could act as a camouflage allowing them to evade would-be predators. The aliens are kept afloat by onion-shaped buoyancy bags that dangle from their body, taking in or letting out gas in order to gain or lose altitude. She also suggests they could communicate using pulses of light. 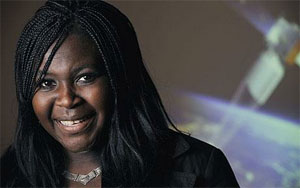 The Independent also reports that Aderin-Pocock believes that “there could be as many as four intelligent alien civilisations in existence in our galaxy.” But because of the distances involved, she doesn’t think we will ever encounter them.

Aderin-Pocock says much of her inspiration for this imagined extraterrestrial comes from the strange deep-sea life forms here on Earth. And although Aderin-Pocock’s extraterrestrial jellyfish would not be able to survive in Earth’s atmosphere, others have suggested that similar living beings do exist in our atmosphere. Author and historian Trevor James Constable pioneered the theory that many UFOs are living beings, or “sky critters” as he calls them. And he describes them as “amoebalike life forms existing in the plasma state.” Similarly, author and scientist Ivan T. Sanderson also wrote about atmospheric beings. He suggested, “If there are living things either in our upper atmosphere or in space beyond that can and sometimes do come down to the surface of our earth, they could be ‘electrical animals’ (as we in fact are). They could produce light, emit stinks and noises and maybe even electromagnetic and other radiations – more especially if they are pure energy feeders.”