Astrobiologist Richard Hoover spent more than forty six years working at NASA. In that time, he established the Astrobiology Research Group at the NASA/Marshall Space Flight Center, and became internationally known for his research on microfossils in meteorites. Hoover has published many papers in which he asserts the discovery of extraterrestrial life in meteorites. 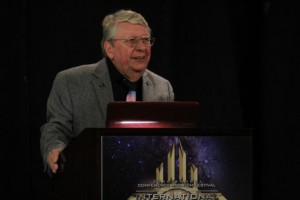 Hoover no longer works for NASA, but he continues his controversial research and is currently an astrobiologist at Athens State University and a visiting research professor with the Centre for Astrobiology at the University of Buckingham. Hoover discussed his research in a lecture at the 2014 International UFO Congress. At the event, Hoover sat down with journalist Lee Speigel of the Huffington Post. Speigel asked Hoover to explain what it is that convinces him that life is not restricted to Earth. Hoover responded, “I am absolutely convinced that life is not restricted to the planet Earth because I have found the remains of lifeforms that are absolutely, conclusively extraterrestrial.”

Speigel pointed out that Hoover’s findings have met with harsh skepticism by critics. But Hoover stands behind his research. He replied, “These critics will not debate me in an open scientific forum. I would be perfectly willing to go to the Cosmos Club in Washington, to go to any university and have an academic debate and scientific discussion.”

Opportunity rover in 2004 took an image of a fascinating structure on Mars that shows structural features that are consistent with organisms on Earth known as crinoids . . . Crinoids are echinoderms, like starfish . . . so these are animals! And I’m saying that Opportunity took a photograph on Mars that shows features that are consistent with what we know of crinoids . . . Now, the fascinating thing is here you have a possible fossil of a very interesting organism in a rock on Mars, and three hours and a half after that photograph was done, that rock was destroyed by the rock abrasion tool. 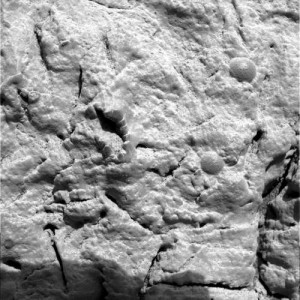 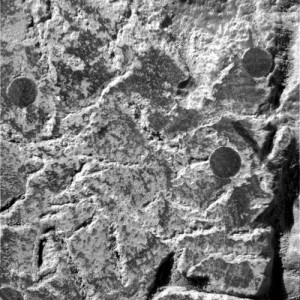 The same area after being ground down by the rover’s abrasion tool. (Credit: NASA/JPL/Cornell/USGS)

Hoover claims that he asked NASA astrobiologist David McKay to explain why such an interesting structure was destroyed. He was told that it was done “to look at the inside looking for carbon.” But Hoover has a problem with this answer. He explains, “Well, the problem is, anyone who does much in the field of paleontology knows that you don’t have to find carbon to find fossil.” To further explain his confusion by the decision to destroy a potential fossil, Hoover offered this analogy: “If a paleontologist finds on Earth a rock containing an interesting fossil, they collect it. You would never have a paleontologist say, ‘Gee. That may represent a new genus of life on Earth. Where’s my rock hammer? I want to smash that to bits.'”

Although Hoover is not the first to question this 2004 event, it is interesting to hear the opinion of someone formerly associated with NASA.

You can watch Speigel’s full interview with Richard Hoover in the video at the top of this post.