This year's San Diego County Fair will have an extraterrestrial theme, and will include UFO exhibits. 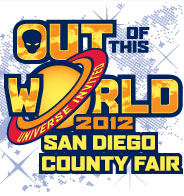 This year’s San Diego County Fair will have an extraterrestrial theme.

According to the press release issued on April 19, the title of the 2012 San Diego County Fair is “Out of This World!” As the name suggests, fair organizers promise an “out of this world” experience “featuring man’s fascination with the world of outer space and the wonder of the universe, as well as the fun and imaginative world of science fiction.” But this extraterrestrial theme goes far beyond space exploration and science fiction.

In addition to displays highlighting various NASA projects, the fair will also reportedly feature UFOs. The press release states, “Open your mind to UFOs! The most notable events of UFOlogy are on display – including Roswell, the mystery of Area 51, and more.” An area dubbed “Area Fifty-Fun” allows visitors to “enter the realm of science fiction, UFOs and other evidence of life beyond earth.” Features include a mock UFO crash site, exploring the mystery of crop circles, and looking into the Mayan Calendar and the 2012 predictions.

The 2012 San Diego County Fair opens June 8, and runs for 24 days (the fair is closed Mondays except July 2). For more information, visit the fair’s extraterrestrial-heavy website at http://www.sdfair.com.