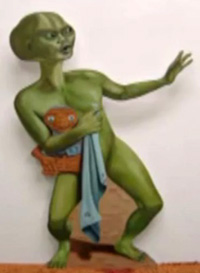 A popular mural meant to welcome visitors to Roswell depicting a nervous alien family being greeted by hospitable earthlings has been burglarized. Someone stole the alien baby.

The famous Roswell UFO festival, commemorating the anniversary of the suspected crash of an extraterrestrial spaceship, brings in thousands of visitors. Many of them stop by the mural described above to take pictures. Although it is on private land, Allen Holloway, who runs oil and trucking business across the street, says people often hop the fence to take pictures with it.

The mural was painted by John Cerney of California, and Dorrie Faoubus-McCarty, the director of the Roswell Chamber of Commerce, told KOB TV that the murals run between $30-35,000. This particular mural was a gift to the city in honor of the UFO festival.

The alien baby was found to be missing Saturday morning, so it is suspected it was taken Friday night or early that morning. Mark Briscoe, Manager of the UFO Museum, said, “I was in shock because I can’t believe that it would have already happened.”

The mural has only been up for two months. The city says it will ask the painter to make a new one, and continue searching for their beloved baby. They also plan to increase security around the mural. 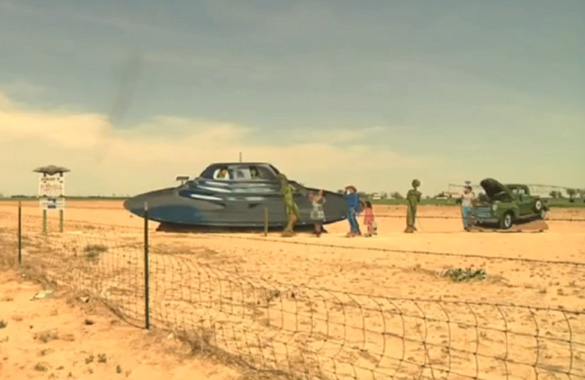