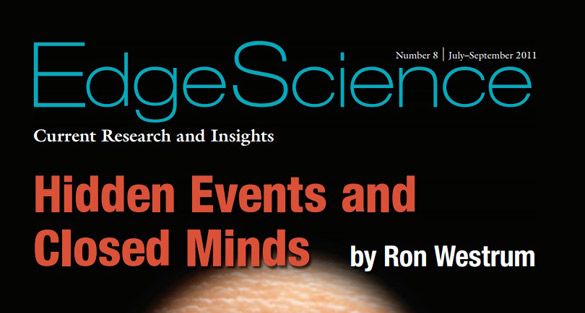 Open Minds UFO Radio: Westrum says when an event is widely experienced but seldom reported, we can refer to it as a “hidden event.” Many anomalous events, including UFOs, by appearing to violate common sense or scientific paradigms, fall into this category. We talk to Ron about hidden events and how the public had reacted to them historically and how that relates to UFOs. We also talk to him about his lifelong interest in the UFO phenomena, and his work as a consultant for the Mutual UFO Network (MUFON).

Ron Westrum is emeritus professor of Sociology at Eastern Michigan University, holding an honors B.A. from Harvard in Social Relations and a Ph.D from the University of Chicago in Sociology. Dr. Westrum is a specialist on the sociology of science and technology, and has written books such as Technologies and Society: The Shaping of People and Things (1991), as well as Sidewinder: Creative Missile Design at China Lake (1999). He has been a consultant for NASA, for the National Research Council, and also for the Mutual UFO Network.

He will be speaking at the MUFON Symposium in July, 2013, and the 2013 Symposium on Official and Scientific Investigations of UFOs in June, 2013.