Home / Articles / Review: A.D. After Disclosure
...who will disclose the information and how? What will the public find out? If it is something awful, do we want to know? What are the possible ramifications of disclosure, and how will our world change? 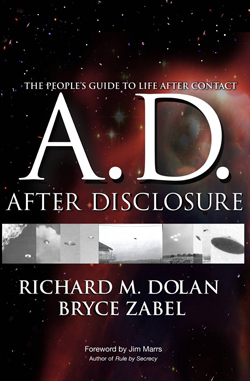 UFO researchers often express the desire for the government to disclose UFO secrets. But if and when that happens, who will disclose the information and how? What will the public find out? If it is something awful, do we want to know? What are the possible ramifications of disclosure, and how will our world change? These are the questions authors Richard Dolan and Bryce Zabel tackle in their new thought provoking book, A.D. After Disclosure.

The book sets the ground rules right off the bat; it is about speculation, it isn’t about debating the reality of UFOs, nor is it about presenting evidence. Normally, I wouldn’t be interested in a book based purely on speculation, if it not for the subject of the speculation in this case and the people doing the speculating. Speculation alone, of which this field has no shortage, can turn into chasing your tail, but in this case we have very educated and thorough speculation. At times the book reads more like a report prepared by a think tank.

The word “disclosure” is thrown around and taken in vain in the UFO research community, often, dare I say, in an irresponsible way. The longing for disclosure is like demanding that the police reveal the facts of a crime scene when we don’t know the details ourselves, and thus cannot fathom the repercussions, or the effects it may have on solving the crime. It is easy to demand, but it seems incumbent upon us as responsible researchers to examine in detail what we want, and prepare for what might happen when or if we get it.

A.D. After Disclosure is Dolan and Zabel’s first collaboration, and they make an interesting pairing. Dolan is a historian, who has been documenting the history of the UFO phenomenon from 1941 to 1991 in two volumes, and will bring us up to present day in his third installment, which he plans to have finished by 2012. I have always found refreshing his open-mindedness and devotion to unbiased, accurate observation. Given the task of researching the ins and outs of this phenomenon over the decades makes him ideal for the task of recognizing patterns from the past and making educated guesses about the future.

As for Dolan’s coauthor of A.D. After Disclosure, who is better at speculation than a Hollywood writer, producer, director, and actor? The entertainment culture is all about observation and speculation, and in true sci-fi fashion, Bryce Zabel has produced his speculation regarding this phenomenon in the form of Hollywood scripts. He created the NBC television series, Dark Skies, a science-fiction thriller based on UFO research. He also wrote the SyFy channel’s first original film, Official Denial, and worked with Steven Spielberg on his alien abduction miniseries, Taken. 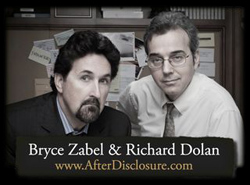 In a creative mixture of historical examination and science fiction, the chapters of A.D. After Disclosure are punctuated by fictional vignettes. For example, one of my favorites was a letter petitioning for Thomas Mantell to get a medal of honor. Mantell was a pilot in 1948, who while in pursuit of a supposed UFO, crashed his jet and died. However, the speculation here is that perhaps in a world after UFO disclosure, we will be giving medals to those who died in UFO-related incidents, rather than suggesting, as the U.S. Air Force has done, that Mantell mistook Venus for a UFO, flew too high, blacked out due to a lack of oxygen, and then crashed—a conclusion that seems rather disrespectful.

The book is organized in a fashion that is friendly to any level of UFO education. Those who pick this book as their first venture into UFO research will probably need to follow up on some of the references cited. The first few chapters, however, do a good job of giving a quick and dirty synopsis of the history of this research as a base for the speculation that follows.

After the initial education section, the book moves on to presenting several scenarios of how each level of disclosure may play out or affect many different areas in society. For example, what does the president really know about the UFO topic,  how would he go about disclosing, and why would he choose to do so in the first place? How would he get educated on the issue, and who would give him this education? This is just one example of the in-depth treatment given to each topic. The book moves on to examine effects of disclosure on the economy, science, law, education, anthropology, biology, archeology, philosophy, religion, media, and much more.

Of course, there is the big “who are they?” question, a hotly debated topic in the UFO research community. Are UFOs friend, foe, neither, or all of the above? Whichever it is will have a large effect on what is disclosed, and how the public will respond. Dolan and Zabel try to examine this as thoroughly as possible, looking at the abduction phenomenon and popular theories by other researchers.

Finally, there is an examination of a new trend that may become even more important in a post-disclosure scenario—“exopolitics,” or the political relations with extraterrestrials. How might we interact with these beings? What does it mean if they choose not to communicate with society as a whole? Several very interesting possibilities are proposed in the book.

There are many factors to keep in mind about disclosure. I thought I had given thought to most situations in a post-disclosure world and how things might come about. However, reading this book sent my mind whizzing with new and different possibilities, and while this is a book about what might be, it helps one think about what the government and the public can do right now to either assist in shaping this bold future, or how to brace for it.

It is difficult to cover everything on such a broad subject. For instance, I thought that the examinations of the abduction scenarios lacked the incorporation of research performed by psychologists and therapists. As Dolan and Zabel identify in the book, this sort of discussion can never be complete, and with as much educated speculation that occurs about the future, so far no one has been able to predict it with one hundred percent accuracy. Endeavors such as the one these authors have taken on help to shine some light on an important path on which we will inevitably venture. It is the path to a world where it is no longer a secret that we are not alone in this universe, and we are indeed being observed and engaged by civilizations that are truly extraterrestrial.

All in all, I believe this book is an important benchmark, and I hope it brings the internal discussions of UFO researchers to a higher level; one in which we are not just asking the powers that be to make disclosure happen, but where we take an active role in helping to shape an atmosphere that is conducive for UFO disclosure. In a world plagued with heightened emotional knee-jerk reactions, stepping back and using some critical thinking always turns out to be more fruitful.

A.D. is available for purchase on October 25th, 2010. Click the image above to go to the website for the book.

You can listen to co-author of A.D., Bryce Zabel, talking about the book  on his recent Open Minds Radio appearance here.

You will also be able to see co-author Richard Dolan, and get your book signed, at the upcoming UFO Congress. More on that here.