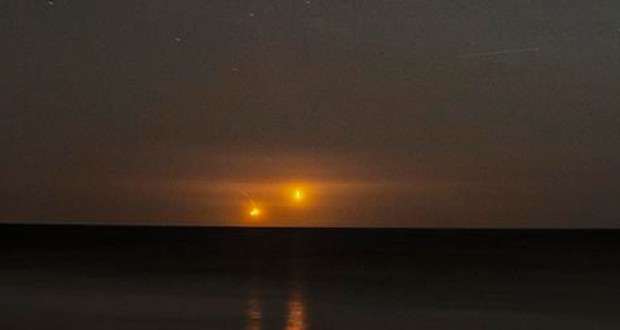 Professional photographer snaps a shot of two UFOs in Canada

A witness photographed two bright orange UFOs in Canada over Lake Ontario on the night of Thursday, October 2.

Jim Montanus, a professional photographer from Greece, New York, snapped the photo at approximately 10:00 p.m. that shows two UFOs over the water in the distance. He posted the image to his Facebook page and his Twitter account with the caption “UFO’s [sic] over Lake Ontario tonight! Or Canadian invasion. You be the judge!”

UFO's over Lake Ontario tonight! Or Canadian invasion. You be the judge! #Roc #LakeOntario #DiscoverOn pic.twitter.com/60pEVrB5gS

But local newspaper the Democrat & Chronicle was able to identify the mysterious UFOs over Canada relatively quickly.

The paper checked with Paul Angelillo, a U.S. Coast Guard search and rescue controller in Buffalo, who confirmed that the bright objects were part of routine search-and-rescue training exercise by Canadian search-and-rescue pilots. Further confirmation was provided by the Canadian Joint Rescue Coordination Centre in Trenton, Ontario. The centre explained to the paper that a combined operation of the Canadian Coast Guard and the Royal Canadian Air Force took place on Thursday between 8:00 p.m. and 12:00 a.m. in which as many as a dozen flares were dropped over Lake Ontario, just south of Brighton, Ontario.

The Democrat & Chronicle notes, “Montanus made his photograph, which shows what seem to be two flares in the sky over the water, at about 10 pm from his home on the beach in Greece. He said his camera was directed pretty much due north; if you look at a map, you’ll see that that’s exactly where you’ll find Brighton, Ontario.”

“Often, this explanation falls on deaf ears,” the paper explains. “People prefer to ascribe the lights to more titillating causes like secret military maneuvers, a terrorist attack in Oshawa or visitors from space.”

Although the paper is careful to point out that flares don’t always explain mysterious lights in the sky, they are almost certainly the explanation in this particular case. And, after some digging of his own, Montanus agrees.

When he initially posted the photo to Facebook, he stated, “People have said these are Canadian military exercises when these lights appear, but I’m not so sure . . .” A 911 operator responded, stating, “Coast Guard is conducting training exercises. We get calls about flare sittings [sic] like these all the time at 911.”

Montanus then posted, “Thanks everyone for your feedback. To those who suggested Canadian Coast Guard, I think you are correct.”

Although the bright objects in Montanus’s photo are most likely military flares, it is still a great shot, and an excellent example of what flares look like in the night sky.