Russia claims they are working with NASA and the European Space Agency on moon bases. 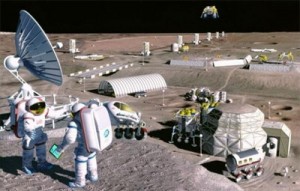 While it might sound like the plot of an awesome Hollywood movie, Russia wants to put a base on the moon . . . in real life.

According to Russian space agency chief Vladimir Popovkin, a growing body of research supports the idea that humans can live for extended periods of time on or around the moon. And, as Space.com reports, Popovkin claims Russia is currently in talks with NASA and the European Space Agency about constructing manned research colonies in orbit around the moon, and even on the moon.

But NASA apparently denies these claims.

NASA spokesman J.D. Harrington told Space.com, “We believe Popovkin may be referring to the work of the International Space Exploration Coordination Group (ISECG) and its Global Exploration Roadmap.” The ISECG developed a long-range roadmap for space exploration that included a possible manned mission to an asteroid or the moon. But apparently no mention of a moon base.