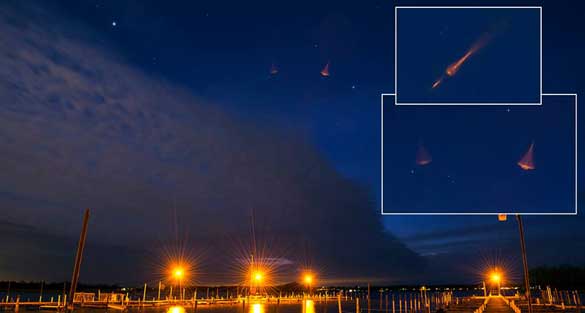 A photographer captured strange looking objects in some of his beautiful pictures of clouds rolling in over Lake Ontario at night. He can’t figure out what the mysterious objects are and says he has never seen anything like it.

Jim Montanus is a photographer who lives in the town of Greece, New York, a few miles northwest of Rochester. On Wednesday night he was on the docks of the Braddock Bay Marina when he decided to take pictures of the clouds rolling in as they slowly covered the piercing bright twinkling stars against the clear dark night sky.

Montanus told the Democrat & Chronicle newspaper, “It was a very dramatic situation with that front coming in. I was all excited about the photo.” 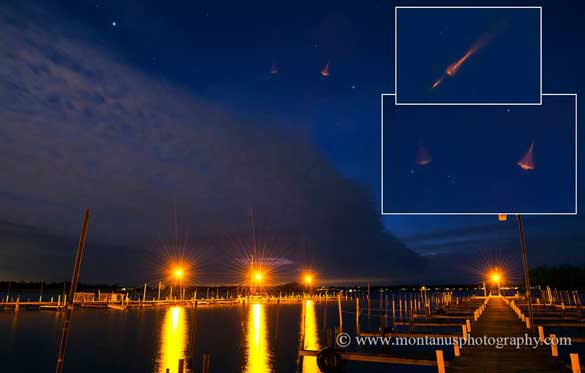 Upon reviewing the images in the viewfinder he spotted two orange cone shaped objects he had not seen with is naked eye.

He says, “I was looking at these shapes on the back of my cameras and saying what IS it? I don’t believe in UFOs, but, you know, it’s just one of those things. It was just cool.”

It was 9:34 pm, and the objects were to the northwest. The camera was set on 15-second timed exposures, so it could pick up more light in the night sky. The images were captured in several different frames, leading Montanus to believe the objects were moving. 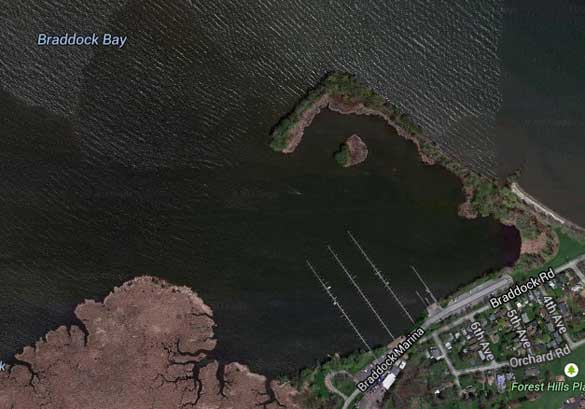 Mantanus posted one of the images with some of the strange objects from some of the other pictures magnified on his Facebook, and he tweeted it.

Check out this incredible picture of UFO’s over #Rochester last night! Not a hoax! #Roc pic.twitter.com/5S4n4RiNV8— James Montanus (@JamesMontanus) May 8, 2014

I’m not kidding, this is freaky! I just noticed this one picture had these crazy looking objects that look like, well, you tell me?

Whatever it is, I’ve never seen anything like it…

Some people had responded that the images were meteors, but Montanus does not agree. He says he can’t figure out what they are. He explained, “It didn’t look like a meteor to me. How a meteor would show up on the camera would be like a stream of light. These were weird, bizarre shapes. I said ‘Look at it, it’s got a parachute or something on it.’ If anything looked like a UFO, it would be that.”

The Democrat & Chronicle did some research themselves. They said Monroe County 911 had no calls about the objects that night. Neither did the National Weather Service in Buffalo. There has been meteor activity in the area, but the meteor shower that day was in the morning, not the evening. 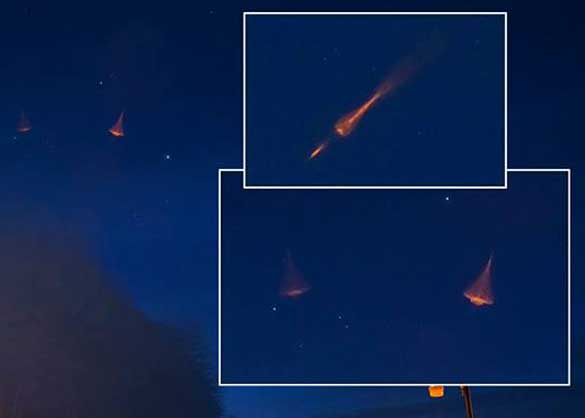 The U.S. and Canadian military do exercises in that area, and occasionally drop flares. However, the FAA said they had nothing in their logs showing military activity in the area that night. The U.S. Coast Guard also said they were not in the area conducting any training that could account for the images. The Canadian air traffic control agency did not respond to the newspaper’s inquiries. The Democrat & Chronicle also noted that the Mutual UFO Network had not had any reports of activity in the area either.

Some have suggested other possibilities, such as Chinese Lanterns, lens flares, light reflecting off of satellites or airplanes, or light refracting off of the atmosphere. However, Montanus has not found a satisfactory answer yet.

Montanus is still mystified by the images. He says, “I was really freaking out when I took it. I’ve never seen anything like it.”