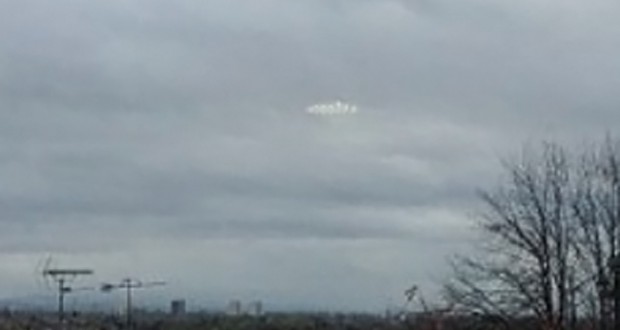 A witness photographed what appears to be a saucer-shaped UFO hovering over the English city of Manchester.

John Hindley was at his friend’s house in Middleton, Manchester on Friday, November 7. He awoke at approximately 10:00 a.m. after reportedly feeling a “lunar pull” drawing him to the window. Standing at this third floor window, Hindley felt compelled to take a photograph. So he pulled out his cellphone and snapped two photos. The photos show an illuminated saucer-shaped object seemingly hovering over the city. 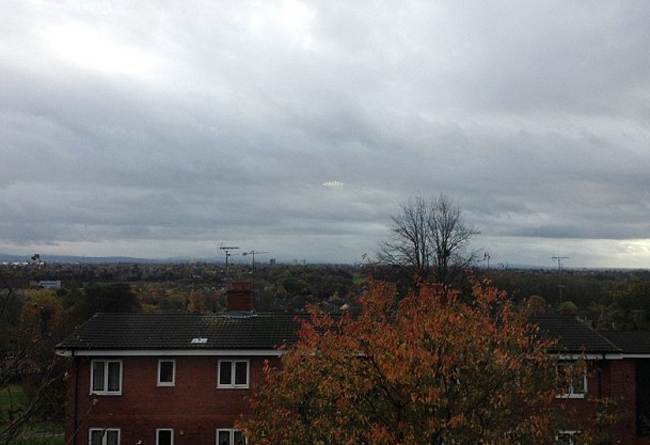 According to the Daily Mail, “The object – which is oval shaped with lights emanating from it – remained in the same position in the sky for half an hour before disappearing.”

Hindley states that, when he photographed the object, he assumed is “was a glitch in the sky.”

Two days after the incident, he claims he felt compelled to look at the photos. He asserts that, when he viewed the images, he felt a “magnetic pull – a lunar pull,” like when he was drawn to the window. “I definitely think it could have been a UFO,” Hindley suggests.

Although the object in these photos that were taken through a window appear to be simple reflections of a light source inside the room, Hindley comments, “I really don’t think it is a reflection – look at the saucer shaped object and the lights and the two lines coming out of the bottom.”

The available details pertaining to this sighting are conflicting. Although reports describe the object hovering in the sky for half an hour, the Daily Express also reports that Hindley “didn’t see what he had managed to photograph until two days later when his mysterious ‘pulling’ sensation returned.” So it’s unclear if the witness actually observed the mysterious object during the time the photographs were taken.