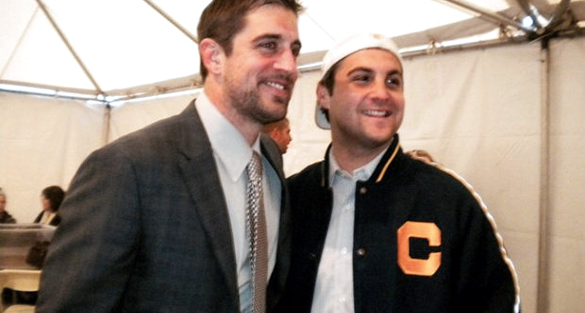 Last week, Green Bay Packers quarterback Aaron Rodgers made headlines when he recounted a UFO sighting during a radio interview. This week, a friend that was present during the sighting confirmed the details of the event with one minor correction.

Rodgers shared his encounter on the podcast You Made it Weird, hosted by comedian Pete Holmes. He said the sighting took place before the 2005 NFL draft pick. He was in New Jersey for an appearance on ESPN’s Cold Pizza morning show.

After dinner with his friend and fellow college quarterback Steve Levy and Levy’s family is when the sighting took place. 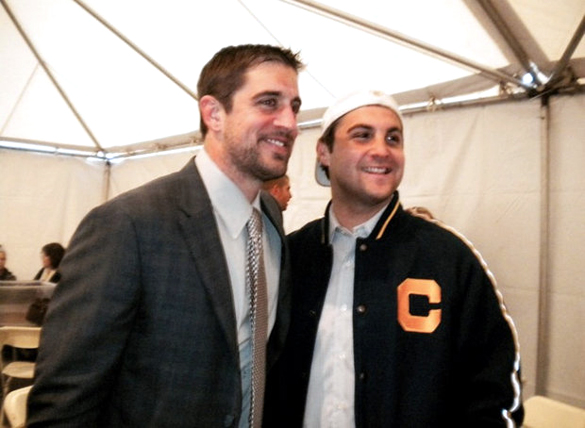 Rodgers seemed hesitant to talk about it, but when he started talking it was clear it was something he was excited about, and remembered clearly.

“We were winding down at dinner and then there was a weird siren in the distance, so we go outside — it was a snowy night — and we went outside and it was one of those bright nights, where it’s overcast, but there’s enough light from the moon to see things and the next thing you know, we saw something in the sky.”

“It was a large orange, left-to-right-moving object. Because of the overcast nature of the night and the snow, you couldn’t make out, it was behind the clouds we were seeing, but it was definitively large in the night sky, moving from left to right,” Rodgers said. “Again, it was like 12:30 at night here. It was me, Steve, and his brother that saw it.”

“And it goes out of sight and we look at each other and go, ‘What in the f— was that?'” Rodgers said. “You could hear it moving. When it had been out of sight for like 30 seconds — and when I say 30 seconds, it felt like five minutes — at the time, we were kind of in shock.”

Rodgers says they then heard the sound of what he thought might be four fighter jets.

“You know the sound of a fighter jet when it flies by,” Rodgers said.

Rodgers was convinced what he saw was nothing normal, and says it was definitely a “UFO.” He also seemed to know a little something about UFO sightings.

“If you know anything about UFO sightings or you’ve done research, you know that a lot of times two things are connected to UFO sightings,” Rodgers said. “One, is the presence of fighter jets. And two, there’s a lot of sightings around nuclear power plants. So to tie it all together, the alarm we heard was from 30 miles out was a nuclear power plant that had an alarm that went off.”

Rodger’s friend Levy recently talked to NJ.com confirming the sightings. He essentially agreed with the story, he just clarified that they were not in New Jersey, but at Levy’s family home in Cornwall, New York.

“I remember very, very, very vividly what Aaron was talking about,” Levy told NJ.com. “It was absolutely wild.”

Levy remembers it like this: A couple months before the NFL draft in February of 2005, Rodgers was in town to appear on ESPN’s “Cold Pizza” morning show. After a large dinner with Levy’s two brothers and parents, Levy said the group heard what sounded like a tornado siren in the distance. The family’s home was not far from a power plant, which could have explained the strange noise.

Levy, Rodgers and Levy’s older brother, Mark, went outside to check it out when they saw something they’ve never been able to explain.

“We went out to the back and there’s a huge tree line over the top of my parents’ property and we saw something,” Levy said. “We were like, ‘What the hell is that?’ We saw the reddish, orange, yellowish light that kept going side by side. It was quite large. And then it just disappeared. People were asking me what it looked like and I Googled warp speed and that’s the closest that it looked like, how it disintegrated. Like when you’re watching Star Trek and they go warp speed and all those lights just turn into lines. It just vanished.”

Dumbfounded, Levy, his brother and Rodgers stared at each other, mouths agape. Levy added even his younger brother, Eric, and parents, Mark Sr. and Angela, saw the object from the house.

Three of the top talent evaluators in the league were asked their opinions on the top running backs in the 2016 NFL Draft. Here is what they had to say.

“We all looked at each other and said, ‘What the (heck) was that?!'” Levy said. “We got very startled. It was like, ‘Oh my God. What just happened?’ We ran through the house screaming.”

Standing on the front yard about a minute later staring in the direction the lights went, “three or four” fighter jets suddenly tore past the house, Levy said.

“We heard this thunderous roar,” he added. “It was like an earthquake hit my house. When we saw that, we thought the world was, like, ending. We had no idea what was going on.”

Levy said he checked newspapers for weeks to see if there was any explanation for the object or jets, but never found any traces. Levy added his family’s home is close to both Stewart Air National Guard Base and the power plant, although he was never able to establish a connection.

Whenever Rodgers plays the Giants or Jets at MetLife Stadium, Levy said he goes to the game and the pair, without fail, talks about what happened that night.

And like Rodgers, Levy said he has no doubts about what he saw.

“I stand behind Aaron,” Levy said. “It had to be a UFO. There’s nothing else that it could be.”

Rodger’s UFO sighting continues to make headlines. The latest story by CBS Sports is about a tweet showing a reenactment of Rodgers’ UFO sighting at the South Park studios.

And is here is the @AaronRodgers12 UFO encounter reenacted…courtesy @SouthPark pic.twitter.com/5re130jhWp

The original CBS Sports story asked whether Rodgers sighting would be enough to convince people UFOs are real. Listen to Rodgers’ interview on You Made it Weird and let us know what you think.