An Oklahoma witness at Ponca City reported watching and videotaping an odd-shaped object hovering in the daytime sky, according to testimony in Case 68054 from the Mutual UFO Network (MUFON) witness reporting database.

The witness was in the middle of town in a Hastings parking lot about 4:30 p.m. on July 8, 2015, when he noticed someone looking up at something through binoculars.

“I saw it easily,” the witness stated.“I pulled out my iPhone and took pictures and a short video. It was better seen with the naked eye. It finally faded into the clouds although it didn’t appear to move. Several people outside the university center were looking at it too.”

The witness checked the local paper after the event and found no mention of anything.

“It was dark gray and stood out from all the other clouds. I have no idea what it was – a strange single cloud, a weather balloon, a spaceship? It was shaped almost like cloud city on “Star Wars” …would love to hear someone else who witnessed it or if anyone can identify this unusual object. Never seen anything like this.” 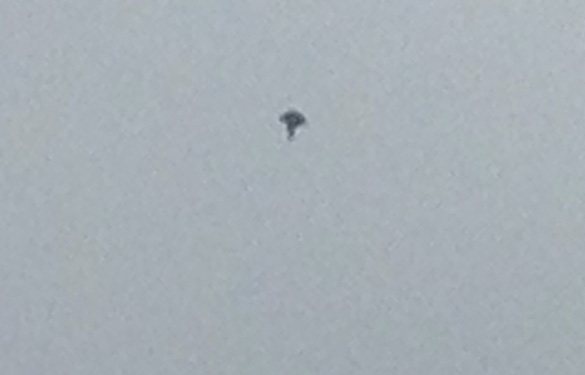 The video can be seen on this page above or downloaded here.

The case was investigated by MUFON Oklahoma State Director Richard Gardner and closed as an Unknown.

“As you can see in the video and pictures this object is a dark shape with a pigs tail appendage in the center pointing downward,” Gardner stated in his report.“There was no sound that could be heard. He said it was approximately 1,500 feet in altitude and probably a little over a mile away in distance. It never appeared to move laterally in any direction, but after a short time seemed to be obscured by the low clouds and he lost sight of it. The wind speed at ground level was 5 mph and visibility was 4 miles. If it was a balloon or plastic bag of some sort it should’ve moved along to the south with the clouds that, according to a witness, were moving at a pretty good clip. Nothing was reported on the local news or paper in the days following. If someone can more readily identify this object I will reclassify if necessary. Right now I am classifying this event as an “UNKNOWN UAV” for the lack of any other explanation.”

Ponca City is a city in Kay and partly in Osage counties, population 25,387.