Home / Articles / No Sleep ‘Til Roswell

A First Trek to Where it All Began. Visiting the “Debris Field” in the Foster ranch with Jesse Marcel Jr.

No Sleep ‘Til Roswell 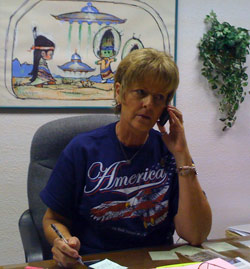 I heard about it and read about it, but I had to see it myself. Sure, they said Roswell is in the middle of nowhere. But when you actually find yourself in the flat, barren New Mexico desert and the only passers-by are tumble weeds, you feel an uncomfortable sensation. What if the engine went down and we all got lost?

Thankfully, we did not find out during our trip in early July 2009. We actually enjoyed our adventure toward a small town that in 1947 was the theater of the most famous and still highly debated UFO crash of all time. For me, even if I was doomed to have my bones scarred on the desert sands in New Mexico, death would have been a sweet consolation because it would have marked the end of my UFO career where “it” all began.

In some ways, being there was a dream come true, like visiting the International UFO Museum and Research Center on Main street, which for me is the inner sanctum of the entire history of the UFO phenomenon and a must-see for everyone.

I have always been convinced that the Roswell incident did really occur in July, 1947, and that the U.S. military decided then – and still believes – that the best way to handle the delicate matter is to bury it. They have hoped that the sand of the desert will cover it forever, until no trace of it is ever visible. But there were too many implications and too many people involved – only a few are still alive. These folks are the last and proud survivors of a vast list of witnesses always convinced that Roswell was no myth and no legend. 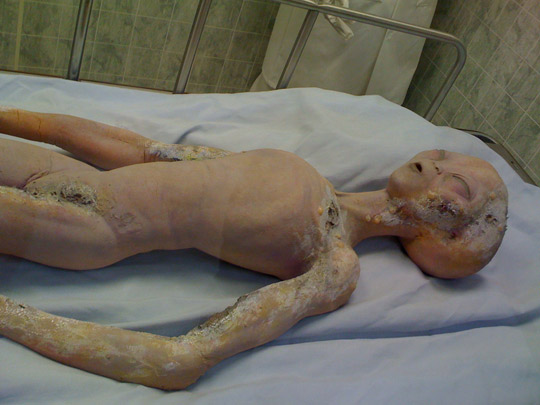 An alien on exhibit at the Roswell Museum.

Roswell will persist, even if the importance of the Annual Festival that draws thousands of people subsides. Julie Shuster, executive director of Roswell’s International UFO Museum and Research Center, firmly believes in the future of the institute and of a town visited each year by almost a half million souls. She foresees a new and larger location for the museum. And once you enter the actual museum’s library, with its long walls covered by thousand of books, magazines and videos, you understand how precious this historic heritage is.

My pilgrimage started in Phoenix, Arizona. I arrived at the Albuquerque airport on July 1 in the late afternoon. There, I met fellow journalist Paola Harris, Col. Jesse Marcel, Jr. (son of the late Maj. Jesse Marcel), British researcher Nick Pope and Alejandro Rojas (then MUFON public relations rep and now on the OM editorial staff). Thankfully, at Paola’s advice, we had something to eat at the airport, because it’s a long way to Roswell. Tired and somewhat exhausted, we arrived in Roswell around 10 that night. The next morning would bring a visit to the “debris field” at the Foster Ranch. 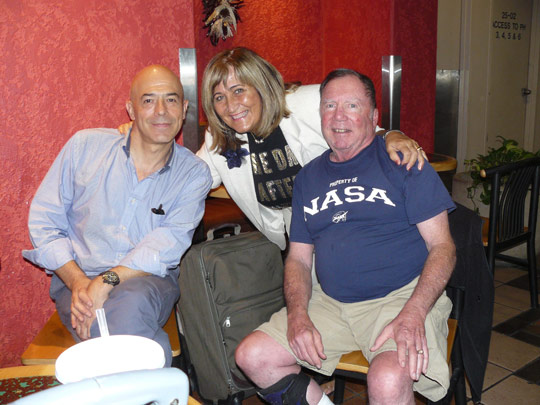 Very politely, Paola Harris had arranged this trip, but she was not with us, busy with interviews and lectures in Roswell that day. Debbie Ziegelmeyer (MUFON Missouri state director and STAR investigator) and her brother Chuck Zukowsky (MUFON field investigator) were our tour guides. Chuck and Debbie know the area of the Foster Ranch very well, as they participated in two on site digs in 2002 and 2006. In both occasions, the research was conducted under the supervision of Dr. Bill Doleman, archeologist at the University of New Mexico, and sponsored by the SCI FI Channel and NBC Television. The location known as the “Debris Field” is a large portion of desert terrain that on early July, 1947 rancher William “Mack” Brazel (1899-1963) found covered by strange metallic and balsa-like fragments that he could not recognize. Brazel later decided to bring some of the debris to Chavez county Sheriff George Wilcox and from that moment on the saga of the Roswell incident had begun. 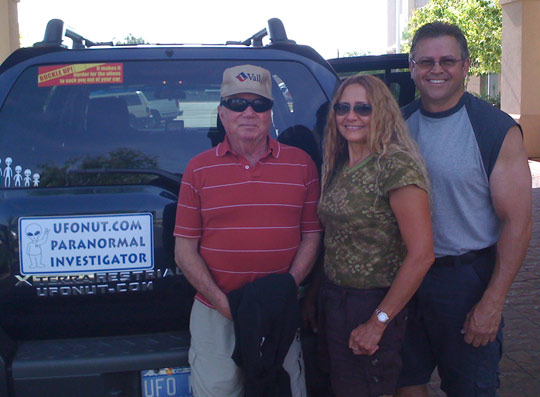 From Roswell was a two-hour drive to get to the Foster Ranch on board Chuck’s powerful Nissan 4×4. Also with us were Col. Jesse Marcel Jr. and a camera operator, Matt Morgan, from Los Angeles. Now 72, Col. Marcel, Jr. would visit for the first time the sites where his father, Maj. Jesse Marcel, Sr. and CIC Capt. Sheridan Cavitt, found the UFO debris. The route was first traversed on asphalt roads, then on dirt roads and then on paths recognizable only to our guides’ trained eyes. There’s no way an ordinary car would make it through the last 2-to-3 miles of stony grounds that lead up to the presumed UFO debris field at Foster Ranch.

Our first stop was at the barn of the corral in the Hines property, where Maj. Marcel, Sr., Capt. Cavitt and rancher Mack Brazel spent the evening of July 6, 1947. They reported that they stored some of the wreckage in this barn, and the next morning they handed it over to Col. William Blanchard, commanding officer of the Roswell Army Air Base, who handled the hot situation under the orders of Gen. Roger Ramey from the headquarters in Fort Worth, Texas. 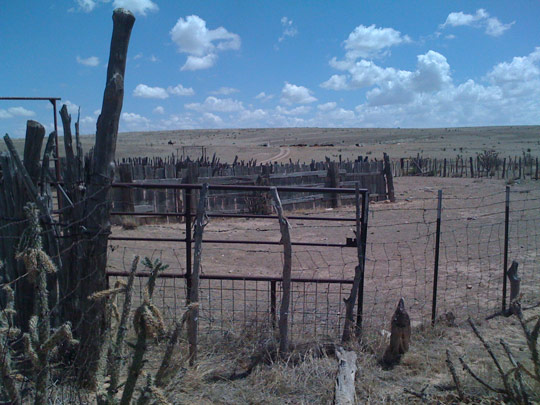 The corral near the debris field on the Foster Ranch.

The Pentagon handled it to perfection, and everybody involved had to be silenced one way or another. It seems that each man in the contingent that cleaned the Foster Ranch, was provided $10,000 to keep the mouth shut forever.

After the stop at the barn and corral we continued into the heart of the Foster ranch getting to a point of reference, the remains of an antique windmill, 75 miles north of Roswell. The windmill marks the direction to the site where many researchers believe a flying disk initially descended and impacted the ground, creating a wide gouge and leaving on the terrain a large quantity of strange debris. In theory, after the alleged alien machine bounced on the ground, it continued its flight for a few more miles and then, according to one reconstruction, finally impacted near Corona, over the Capitan Mountain Range, in Lincoln County. Another theory places a second crash site in the Plains of San Augustin, near Magdalena.

The debris field at the Foster Ranch is a fascinating sight in the New Mexico desert country, very rough and punctuated by singed cacti that were burnt during a fire that swept the area a couple years ago. Surely, this is not a place you would choose for camping or hiking, and the Capitan Mountains are maybe the only appealing natural setting for these activities within many miles. But in the 1940s, the site was actually good pasture, and Mack Brazel was looking for his sheep that morning in July 1947, after a thunderstorm the night before. 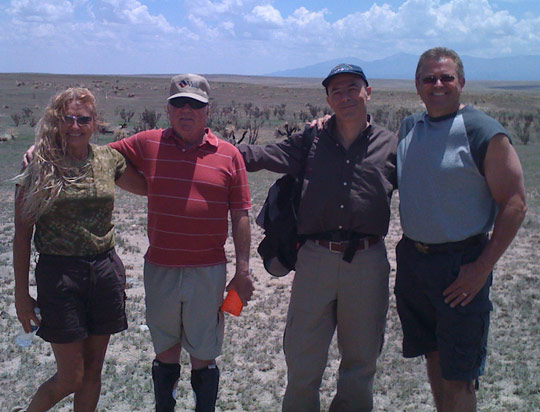 I asked Chuck Zukowsky his opinion and according to him, “one story is Cavitt, Marcel and Brazel were on horseback from the Hines house. They brought debris back to the house and stored it in a shed (which is no longer, the actual barn was rebuilt over it). From the Hines house they loaded their cars and drove on the county/dirt road.” This version makes sense to me, now, after I’ve visited these places. Col. Jesse Marcel Jr. distinctively recalls his father came home that night with his Buick sedan trunk and back seat loaded with the debris that he collected earlier that day.

I roughly estimated the debris to be of 600 yards in length and 300 yards in width, half-surrounded by a shallow cliff of approximately 180-200 feet. The gouge does not exist anymore. The military were very meticulous in their search for each single piece or fragment of debris, and they have filled and leveled the terrain to perfection. “They vacuumed everything,” Col. Marcel, Jr. said as he walked on his shaky legs protected and reinforced by braces. Tireless as he was, we spent more than two hours together, just strolling, talking and wondering. The morning hours were still not too hot and our eyes, the whole time, were attracted by the sloping landscapes of the Capitan Mountains and the clear, magnificent blue sky. 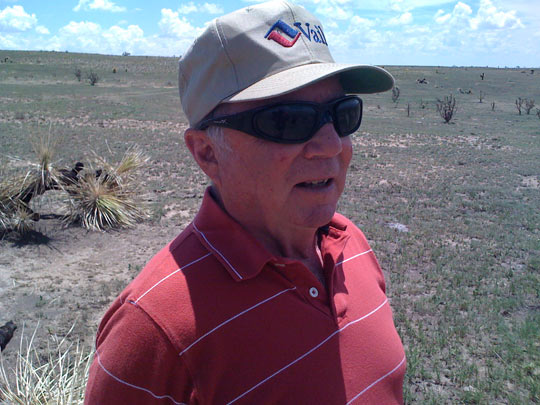 I recorded conversations between myself, Debbie, Chuck and Col. Marcel, Jr. for future reference.

The debris field is still there if you want to go and take a look, but you have to be armed with good patience. You won’t see anything alien there. You may simply breathe some of the same air that Mack Brazel breathed in this high Roswell desert the morning of July 3, 1947, when he found his pasture covered by strange materials. And sixty three years later, I had the luck and the privilege to walk the same walk with Jesse Marcel Jr., one of the last real witnesses of the Roswell crash.