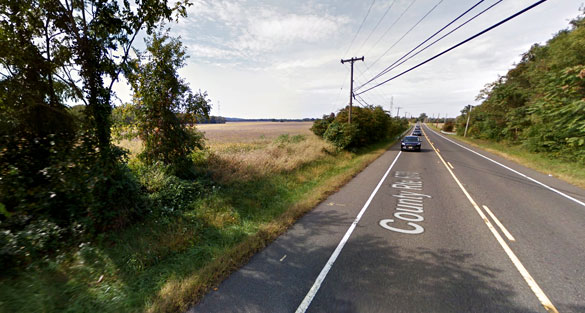 A New Jersey witness at Jobstown reported an encounter with a hovering, triangle-shaped UFO sitting just above the tree line near a military base, according to testimony in Case 74437 from the Mutual UFO Network (MUFON) witness reporting database. 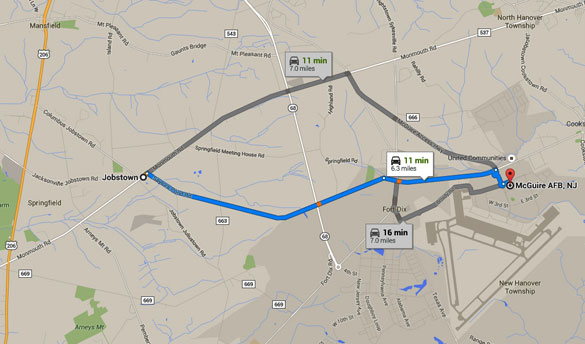 Joint Base MDL was only five miles from the sighting area near Jobstown, NJ. (Credit: Google Maps)

The witness was driving home from a nearby campus at 8:30 p.m. on February 12, 2016, traveling along a back road above five miles from a military base.

“In the sky I saw three bright lights to my left, overtop of the trees that line the side of the road next to a farm,” the witness stated.“I approached going about 45 mph. I thought it was weird how low that plane seemed to be, but I thought somehow it must be off in the distance. I realized this couldn’t be because the three lights were too large.”

As the witness approached closer, he realized that the object was right above the tree line and did not appear to be moving – just hovering in its place.

“I started to slow to a halt, as this was a back road and I was the only car on the road. I stopped at the bottom of the local farm’s driveway, at the most only 40 feet away from the flying object. I was scared for a second because I knew they saw me, and they knew I was slowing down to get a better look.”

“Through the tree line, I tried to identify the tail, which would have to be the back light, because the ship was facing the road at about a 45-degree angle, with the two bright lights on either side where I would have thought the wings would have been (triangular in shape) were facing toward me at an angle. It did not appear to be a normal plane, nor was it behaving like any plane I have ever heard of before.”

The sighting was very close to a military base.

“This was about five miles outside of Joint Base MDL, on the Fort Dix side of the base. Even though I live so close to the base, planes are not that common above this road, at least not directly above; the air fields are not on this side of the base.” 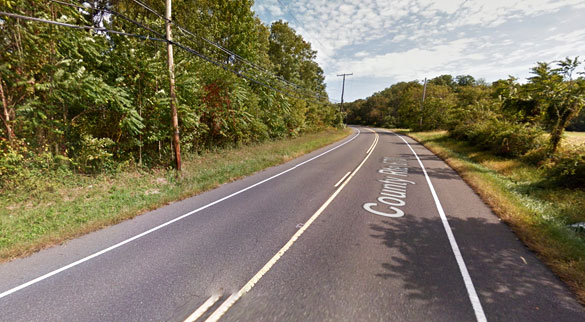 The witness was driving on a rural road similar the road pictured within about five miles of Joint Base MDL. (Credit: Google)

The witness attempted to get a photo of the object.

“This ship was about three to four stories off the ground, right above the tree line. I grabbed my phone to try and get a picture, but I started to turn around since I passed it slightly to get to the driveway, and I couldn’t turn and use my phone at the same time. In the minute it took me to turn around, I could still see the brightness cast from the three lights. This is a back road with no other lights, which is how I knew it was still there. As soon as I had fully turned around to see it straight on again, it was gone in a second.”

The witness did not see the object move away.

“I did not see it move or accelerate at any rate. It went from hovering in its place, to gone. I was in complete shock because I was still trying to convince myself that this was a small plane. I drove forward for maybe another 30 seconds before I stopped my car to search the sky. I saw faint lights way off in the distance. I searched the sky for any other lights to make sure that was it; it was cloudy tonight so I hadn’t seen any stars or other planes moment before viewing these lights. I knew that those three lights were the lights I was seeing off in the distance. It had to have been at least 2-3 miles away, but most likely a few more. I felt like it only sped off because I had stopped so close to it and it did not want to be observed.”

The witness wondered what he had just seen.

“I sat in my car for a few seconds still in disbelief, trying to come up with another explanation for what I saw, but I couldn’t. No plane, or military plane comes off base and decides to hover over a random line of trees; I’ve never seen the military run any tests over us before, and I’ve lived here for over eight years once my Dad retired as a high ranking officer from the military. The whole sighting lasted under five minutes, and once the lights were barely visible I turned back around and drove the quarter-mile home.” 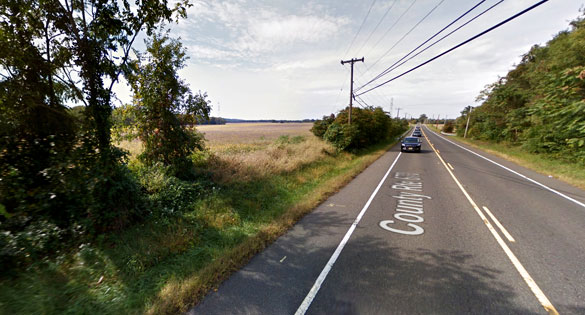 The witness stopped when he realized the UFO was hovering just 40 feet away along a rural right, like the one pictured here, within five miles of Joint Base MDL. (Credit: Google)

The witness first reported the event to his father.

“I went straight in to find my Dad and ask him what that space ship could have been if it belonged to the military. He said maybe a drone, but it was the size of a small plane and hovered in the same spot for at least two minutes that I observed, but I have no idea how long it had been there before I came down the road.”

Jobstown is an unincorporated community located within Springfield Township in Burlington County, NJ, population 877. Please remember that most UFO sightings can be explained as something natural or man-made. The above quotes were edited for clarity. Please report UFO activity to MUFON.com.