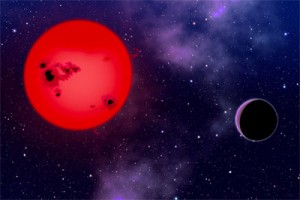 Scientists recently announced the discovery of a new type of alien planet. The new planet, GJ 1214b, is in a new class of exoplanets that was discovered by NASA’s Hubble space telescope. According to Space.com, the new “super Earth” is “a watery world enshrouded by a thick, steamy atmosphere.”

In a statement released by Zachory Berta from the Harvard-Smithsonian Center for Astrophysics in Cambridge, MA, who is the lead author of the research study, “GJ 1214b is like no planet we know of . . . A huge fraction of its mass is made up of water.”

GJ 1214b is located 40 light-years from Earth in the constellation Ophiuchus, and is approximately 2.7 times Earth’s diameter. And while the planet might be home to some type of life, with a surface temperature of 446 degrees, it is much too hot for life has we know it.