It appears that Scottish UFO hacker Gary McKinnon may have regained some hope in his fight to avoid extradition to the United States. 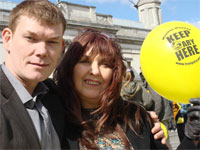 It appears that Scottish UFO hacker Gary McKinnon may have regained some hope in his fight to avoid extradition to the United States. During a joint press conference today with Britain’s prime minister David Cameron and U.S. president Barack Obama, ITV News Political Editor Tom Bradby asked the President and the Prime Minister about the McKinnon case. According to ITV News, the President responded that the issue is “in the hands of the British legal system.”

In response to this news, Janis Sharp, McKinnon’s mother, posted the following message to her Twitter account: “Obama said on TV with Cameron, Happy to let UK make extradition decision and U.S will abide by it. #FreeGary.”

McKinnon and Sharp had their hopes raised last year when Obama stated that the U.S. would find an “appropriate solution” to the situation. But just two weeks ago, those hopes were crushed when U.S. Attorney General Eric Holder vowed to take all necessary steps to extradite McKinnon. Following today’s developments, however, there is renewed hope that McKinnon will be allowed to remain in the UK.