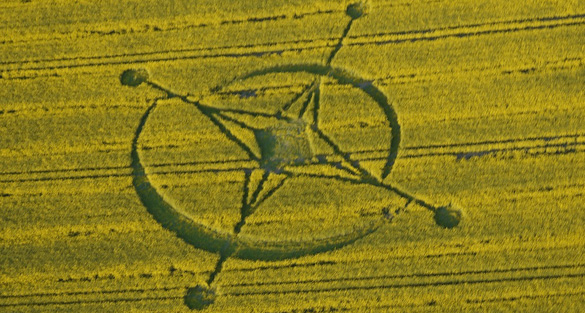 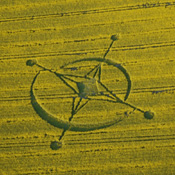 Although the public has been fascinated by the magnificent designs that show up in the crops of England every summer, the farmers have not been delighted by the phenomenon. In fact, they get a little miffed. Their frustration can be understood with the loss of their crop, and the gaggles of croppies (crop circle enthusiasts) that trample their fields. While many are respectful of the farmers’ land, many others are not.

A solution has been developed, a crop circle access pass. According to the Telegraph, the idea was developed by Dutch crop circle enthusiast, Monique Klinkenbergh, and passes are available for the first time this year. Crop circle tourists can visit the Crop Circle Information & Co-ordination Center (CCIC) in Wiltshire to purchase the passes and get information on recent formations.

The CCIC website says that the passes were developed “with the involvement of farmers, the National Farmer’s Union, VisitWiltshire, The Devizes Museum and the Devizes Constituency MP Claire Perry.” The idea is that purchasers of the passes agree to a set of rules that help guarantee the respectful use of the farmers’ crops, and the farmers that participate split the proceeds from the access pass sales.

Klinkenbergh told the Telegraph, “Many farmers are justifiably angry at the destruction of their crop, the loss of income and the lack of respect for their land that they feel is often displayed by visitors” She continued, “Visitors are often upset by angry responses from farmers as they do not fully understand this.”

It is hoped that the crop circle access pass will ease this tension. Prior to this, the only way farmers could get compensated for their loss was to put out a collection jar near the formations. Some people would donate, some would not, and even worse, the jars were occasionally stolen.

So far this year there have been three crop circles reported, all of which can be seen at the CCIC website. However, as of yet, none of the farmers at these locations have chosen to participated in the access pass program.