...there are stories of beings housed on Indian reservations and that is real and pieces are being put together now. 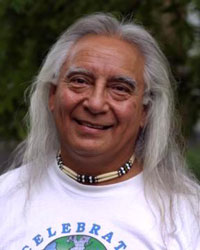 I have had the pleasure of spending time with a Native American wisdom keeper, Rainbow Eagle. He would often come to give lectures in Colorado, and it so happened we were staying at the same friend’s home one evening. We got to know each other and I have been able to spend time with him several times since. He is an Okla-Choctaw American Indian, but has learned the traditions of many Native American cultures and now shares that information as a storyteller, author, and teacher.

Among the information he shares are the tales of interaction with Native Americans and Star People. According to Rainbow Eagle the Native Americans have a rich history of communicating with our cosmic neighbors. He will be sharing this information at the International UFO Congress this year. Rainbow Eagle’s wisdom is always set in the context of the Native American philosophies of the “old systems” as he calls them. He has important messages to share regarding breaking free of fear and recognizing our true potential. I had heard him speak about abduction experiences, and a few years ago found some time to sit down with him and ask him some questions on tape. It was an outdoor event and I was unable to decipher a portion of the interview due to wind, but I was able to recover some wonderful insights.

Alejandro Rojas: In Native American history, or among the community, do many people have abduction experiences?

Rainbow Eagle: The name “abduction” means that something happens that is against someone’s will. Things of that flavor have not been shared with me, as far as people being taken. Native American spirituality is to be present and in charge, the phenomena of not being [in control]… that vulnerability is not the old system. It is a being ever present here and now sort of a system.

AR: Do you believe that there is a quality or part of the old belief system or practices that help Native Americans from having these kinds of experiences. 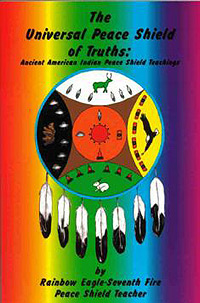 RE: The whole concept of protection has been more of a focus of the system that came across the water, even though now some of our native people have embraced that [idea] of having to protect themselves. In the old days if you understood and knew where you were going and you were in your vision, then there was certainly a lot less focus on protection. Their skill gave them their approach to that intense experience. If it was time for their life to end, every one of us is born with a certain number of days, if it is time to cross over and come back then it is time. It is only the idea of protection that gives you the idea that you didn’t want to cross over. They were willing to do what they were supposed to be doing without worrying about whether it was going to take their lives. I am just saying protection was a small concern. There were different tribal systems and you knew if you walked around [other tribes] you may be at risk. But the idea of negative forces of evil forces, we didn’t have that. It wasn’t reflected in nature, that energy of negative. In all energies each one has its potential and pushing and pulling but it was all given a place rather than a judgment and judgment was more important with philosophies that came to this land.

AR: I find that a lot of people will tell me when you explore the paranormal you should protects yourself from this or that. I believe my intent protects me.

RE: In a simple reference to this idea in all of our ceremonies inside all of relations we do not exclude anything. Now today people are choosing different philosophies and choose working with good spirits and bad spirits, this is a recent introduction, but the old system is that the creator created everything and that we are all interconnected with different natures that are going to affect us in different ways, but we are still part of a whole picture.

AR: Do you have stories of Native Americans interacting with the aliens called the “greys”?

RE: The greys are only one group, if you know anything about the stories put together… the aliens might have visited Eisenhower in 1954, two groups, one in Norton AFB in Florida and one in Palm Springs, California. The ones in California signed a treaty with Eisenhower, and their descriptions were more like greys. They had a need and purpose to get into an arrangement. They had cloned themselves over and over and lost their life force, traveling the universe to find the life force again to be restored. More to this story needs to be understood, but there are stories of beings housed on Indian reservations and that is real and pieces are being put together now.

AR: When it comes to people who have abduction experiences what advice would you give them?

AR: How can people in Western culture understand how to set up their boundaries? 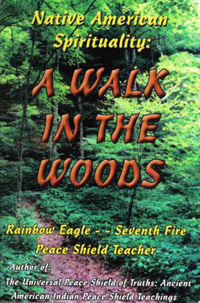 RE: The creator is never far away, the creator is within all of us. Getting a relationship with the creator, the divine is not far away, it is close and within us…we are worthy of a sacredness that we are in partnership with. [Understanding that] we are worthy and valuable and we are outside of judgment, then the creator is going to be very present. So if there is that which comes, it is not just you but you and the creator standing their place. There are universal laws, and we need to establish our universal powers. There are cosmic laws that need to be taught.

AR: Do you feel some people feel undeserving or incapable of creating their space?

RE: Yes, we have a long history of not understanding. You need to put the pieces in place. Those pieces are inside you, not what you put around you.

AR: Is the paranormal natural or above normal somehow?

RE: Today they are outside of the normal experiences of most people. Native people were used to shape-shifting, they understood it in stories. They understood that is was something very possible within their daytime experience and dreamtime experience, and so they were a lot more prepared for the abnormal because everything was there, everything was life. Today, we seem to separate, [the paranormal] is something that is not a regular experience for most people, so even our native people are struggling with how we view events that we are not prepared for since we have spent a lot of time outside of our old system.

We had shape-shifting, dreams that would tell us backward and forward through time. We didn’t decide on what was good and what was bad, it was all experiences. Today we have gotten different lessons that push us into an evaluation of what is normal and what is abnormal. I think the younger generation is going to be able to make more steps into being prepared for what their parents and grandparents wouldn’t allow and would not be spiritually prepared for because of fear and because of their weakness. This institution has come in place because people have been told that they are weak and unworthy. They can’t be powerful… they think we need someone to protect us.

AR: What is the purpose of these paranormal experiences?

RE: To see all of life as reality and to see beyond what you think you see. To see into the experience, and not just blocked by the image. Something always is in or inside every image… an energy spirit whether or not it is a being in a physical presentation. It is a spirit to spirit energy relationship.

For more about Rainbow Eagle visit his website here.