Home / Articles / UFO News / NASA extraterrestrial life researcher dies
Blumberg died at the age of 85 on Tuesday during a NASA workshop in California. 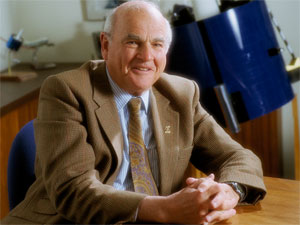 Baruch Blumberg died at the age of 85 on Tuesday during a NASA workshop in California. He reportedly died of a heart attack shortly after giving a keynote address at a workshop on lunar research at NASA’s Ames Research Center. USA Today explains that Blumberg helped “NASA begin its search for extraterrestrial life and the study of the origins of life on Earth as director of NASA’s Astrobiology Institute at Moffett Field from 1999 to 2002.” According to the New York Times, the objective given to Blumberg and his team at the institute was to answer the following questions: “How does life begin and evolve? Does life exist elsewhere in the universe? And what is life’s future on Earth and beyond?”

Blumberg was on the SETI (Search for Extraterrestrial Intelligence) Institute’s Board of Trustees. But as he explained in a 2002 New York Times interview, he would have been “very surprised if we found something in space, that it would look like E.T.”

Before he began his search for extraterrestrial life, Blumberg was heavily involved in virus research and vaccine development. USA Today quotes former NASA Administrator Daniel Goldin as saying, “Barry saved lives through his research on the Hepatitis B virus. He also inspired a whole generation of people worldwide through his work in building the NASA Astrobiology Institute.” Blumberg’s work developing vaccines earned him the 1976 Nobel Prize in Medicine.

Through his work in medicine, Blumberg is credited with saving millions of lives. Because of his work at NASA’s Astrobiology Institute, the institute of which he was the founding director, he is credited with expanding the understanding of the evolutionary phenomenon called polymorphism, in addition to inspiring a generation of astrobiologists in the search for extraterrestrial life.