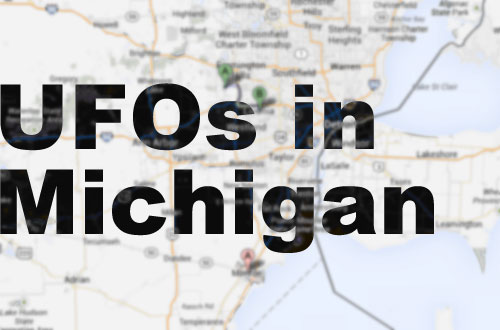 Residents in various cities reported UFOs over Michigan on the night of Friday, August 23.

According to Monroe News, a woman in Monroe, MI reported her sighting to the Michigan chapter of the Mutual UFO Network (MUFON). She explains that “she and her husband were traveling north on S. Tele­graph Rd. between Albain and Dunbar Rds. when her husband saw orange lights in the sky from his east-facing passenger side win­dow. They watched as the number increased to about 17 and then simply disappeared.” This sighting reportedly occurred at approximately 10:15 p.m.

Monroe resident David Gibson reported a similar sighting that also occurred at approximately 10:15 p.m. Monroe News reports that he was out for his nightly walk when he saw ten “orange orbs” ascending into the sky. As the lights started disappearing, he noticed four silent “large dark discs” with pewter-colored bottoms hovering overhead. Gibson describes that “it ap­peared as if the orbs were enter­ing the discs, and then everything disappeared.” 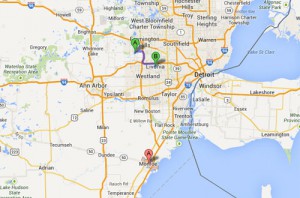 Other witnesses around the state of Michigan reported similar sightings on the same night. Earlier that evening, at approximately 9:10 p.m., a witness in the town of Montrose (more than one hundred miles north of Monroe) saw a UFO. The sighting reported to MUFON states:

I was watching tv. Son came from outside to tell me to come see something weird in sky. Went out to road so there were no obstructions. (We are in the country. Dirt road, expansive dark sky, etc) Stood and watched a bright, fuzzy edged roundish light moving from south to north across the sky. Appeared to be faintly pulsating. Deviated a couple times from straight line flight. Moving to the left and right. Slower moving than planes Ive seen. Did not hear any sound. Kept watching until it seemed to pulsate or extinguish into nothing.

At approximately 10:10 p.m., a witness in Livonia (forty miles north of Monroe) “saw an orange red object for a couple minutes moving from the s/e to the west”

“My wife and I were walking our dogs when I noticed at least a dozen lights in the sky low to the NE. These lights were star like. Red in color and pulsed. Being a retired air traffic controller I am familiar with aircraft lights at night. These were all only red in color and pulsed at random, not like aircraft lights. The objects appeared to track SW gaining altitude and at about 30 degrees above the horizon they turned North and disappeared. We observed up to a dozen lights at a time in a staggered line and as the leading lights faded away new lights were appearing from behind the trees. The whole event lasted approx 90 sec and we saw at least 18 separate lights. Due to my back ground I did not feel that these were aircraft, especially since there were so many in close proximity to each other, and how they just vanished like they went into a cloud, except it was a clear night with no clouds in the sky.”

William J. Konkolesky, state director of Michigan MUFON, suggests Chinese lanterns as a possible identification for the UFOs over Monroe. But Gibson doesn’t agree with that possibility. Chinese lanterns were reportedly launched that night from nearby Sterling State Park, but Gibson told Monroe News, “Those Chinese lanterns would have been too far away for me to see, but what I saw were bigger than Chinese lanterns.” He added that the Chinese lantern theory does not explain the discs he saw.