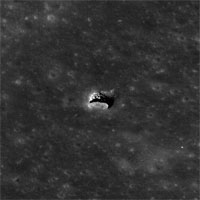 NASA’s Lunar Reconnaissance Orbiter successfully recorded an image of a lunar pit. And because of the Orbiter’s position and the angle of the sun, this recorded image allows scientists to see into the lunar pit for the first time. On previous attempts to photograph the lunar pit, the images returned were too dark to make any concrete determinations. This fourth and most recent image provided scientists with the evidence to prove the existence of lunar caves.

According to the Daily Telegraph, this discovery could open the door to developing lunar bases because “the pit is wide and deep enough to protect people from dangerous meteorite impacts, cosmic rays and extreme temperature fluctuations.”

While many scientists have been quick to push space research efforts farther out into the universe, at least some scientists still see the value in exploring our closest neighbor—a neighbor about which we still know very little.