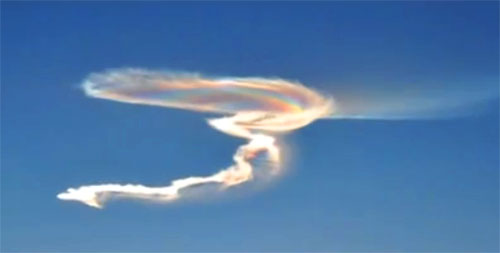 Southwestern United States residents were awestruck and mystified by a colorful streak in the sky on Thursday, September 13. Witnesses in Colorado, Arizona, Utah, Nevada, and California saw this formation at approximately 5:30 am Pacific time. Hundreds of viewers reportedly called or emailed ABC15 in Phoenix, Arizona to report the oddity. But ABC15 quickly reported that the anomaly in the sky “was a contrail from missile tests at the White Sands, New Mexico Missile Complex.” 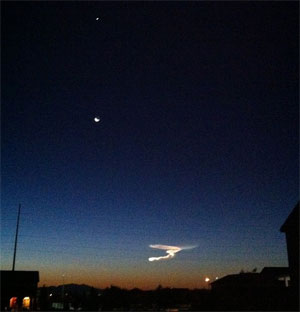 As Space.com explains, the brilliant streak in the sky “was created by the launch of an Army Juno missile early Thursday from Fort Wingate in New Mexico, which soared high into the atmosphere on its way to the White Sands Missile Range to be intercepted by a Patriot missile. The unarmed Juno rocket flew so high that its long contrail reflected sunlight from the yet-to-rise sun, sparking a dazzling night sky light show.”

This contrail generated widespread inquiry across the southwest. According to the Associated Press, a New Mexico deputy in San Juan County stated, “We had gotten reports that there was an explosion or a UFO or missile or whatever, and people thought it was real close so they were concerned there would be debris falling from the sky.” White Sands Missile Range spokeswoman Monte Marlin told Space.com that her office “received more than 100 calls and a flood of emails from observers who saw the Juno rocket’s contrail from states across the Southwest.”

Missile tests are a regular occurrence, so why aren’t sightings like this one more common? A White Sands Missile Range spokesman explains, “It’s one of those things, it does not happen every time — the weather and light conditions have to be just right, and this was one of those times.”