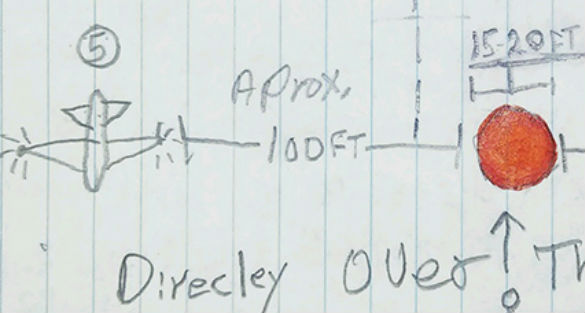 A Georgia witness at Ty Ty reported watching a group of military jets that appeared to be escorting a red-orange sphere at about 600 feet in altitude, according to testimony in Case 82496 from the Mutual UFO Network (MUFON) witness reporting database. 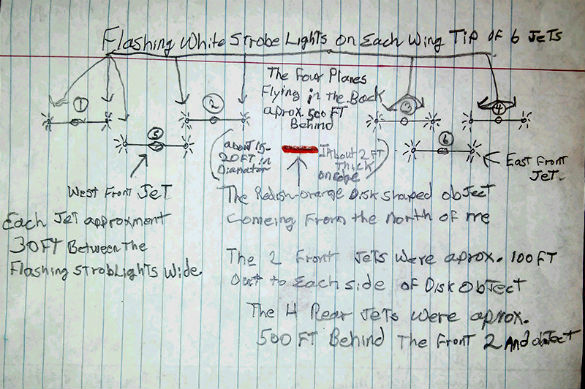 The witness was outside stargazing in his backyard with a telescope at 10 p.m. on February 21, 2017, when the incident occurred.

“I first heard low speed jet engines north of me,” the witness stated.“I turned to see what it was. I saw a row of flashing white strobe lights with a redish-orange ball or sphere in the middle coming toward me moving real slow.”

The witness was overwhelmed with two aspects of the sighting.

“What was so strange about it was how low and slow they were all flying and flew directly over the top of me.” 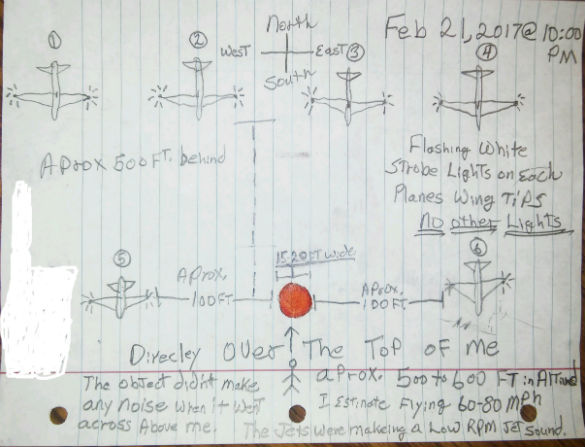 The witness described the sphere.

“This redish-orange sphere looked to be about 30 feet in diameter. It was kind of dim with no strobe lights of any kind. After they flew over, the jet on the west side of the sphere backed off and turned left and got right behind the redish-orange sphere. After that, I couldn’t see them anymore because of the trees that are around one mile south of me. As far as I could tell, they all kept on flying straight south. Now if they should have been flying southeast, they would have been flying towards Moody Air Force Base. I don’t know of any airport that would have been straight south or me. Any help on this ordeal would be more than I have now. This took place in southern Georgia 60 miles north of the Georgia-Florida state line, and 100 miles east of Columbus, Georgia, and 100 miles west of Waycross, Georgia, and 100 miles south of Macon, Georgia, or 10 miles west of Tifton.

Ty Ty is a city in Tift County, Georgia, population 716. No images or videos were included with the MUFON report, which was filed on March 4, 2017.

“The evidence clearly leads to the conclusion that this is an Unknown Other sighting event,” the investigators stated in their report.“However, the 30-foot, glowing, reddish-orange orb was being escorted by very recognizable jet planes. This begs the questions: 1) Did the jet plane’s pilots know what the orb was that they were escorting; and 2) What was their destination?”