Linda Moulton Howe will be presenting exciting new developments about the mysterious unidentified lights, beams and craft seen by at least 30 military men the last week of December 1980 and afterward in Rendlesham Forest, the area between RAF Bentwaters and RAF Woodbridge, England. Accompanying her will be two of the major witnesses to the event, John Burroughs and James Penniston.

Linda Moulton Howe is an Emmy Award-winning TV producer, investigative reporter and author who goes directly to the men and women at the forefront of science and environmental challenges and to firsthand eyewitnesses of high strangeness.
www.earthfiles.com

James Penniston was an Air Force Staff Sergeant at a joint U.S. Air Force and Royal Air Force base at Bentwaters. On December 26, 1980, he was sent to investigate strange lights on the forest. In the forest he came up to a triangular craft that was able to examine up close. This was part of one of the most well documented UFO sightings in history, referred to as the Rendlesham Forest Incident. 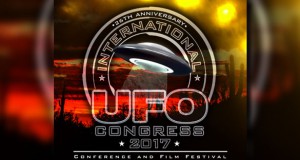