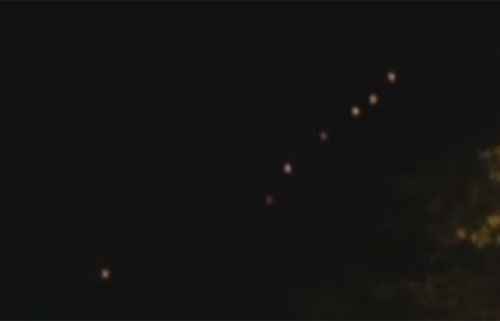 Video was recorded in the early morning of Sunday, December 9 showing a series of glowing lights over San Francisco, California.

Witness Enrique Barrios recorded the series of seven lights with his cellphone camera. He described to CBS 5 that these “fireballs in the sky” looked like “flying candles” at first, but then started making formations. Another witness who photographed the UFOs described that each of the individual lights “kind of looked like a fiery, floaty thing.”

CBS 5 asked Bing Quock, assistant director of the Morrison Planetarium at the California Academy of Sciences, to comment on the strange aerial lights. He said, “It’s not a planet, it’s not a constellation, it’s not meteors, it’s not the moon.” He went on to suggest the illuminated objects were simply lights attached to balloons. Judging by the appearance and behavior of the lights in Barrios’ video, paired with witness description of “fireballs,” “flying candles,” and “fiery, floaty thing,” Quock’s supposition is a good one. These aerial objects were most likely paper sky lanterns, also referred to as Chinese lanterns.