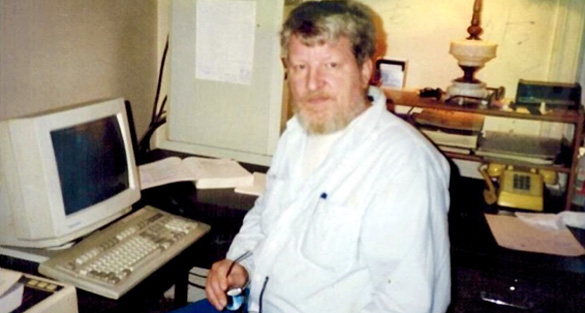 In reflecting on the past year, we often think of those individuals we have lost. In the field of UFOlogy, it is no different. Indeed, in recent years, we have lost many pioneers in this field of inquiry. One such pioneer was a man named Larry Hatch who passed away on August 3rd, 2018. Unfortunately, many were not familiar with his passing or the legacy he has left this field of study.

Larry was a computer programmer by trade. His high level of intelligence was rivaled only by his creative talent for developing innovative ideas using the latest technologies. This went way back to Larry’s childhood. At the age of fourteen, he created his own private telephone system for his neighborhood friends to communicate with. We are not talking about the old cup and string concept. Rather, he developed his own actual stand-alone telephone system as this old news clipping from the San Mateo Times reported in the 1960s. 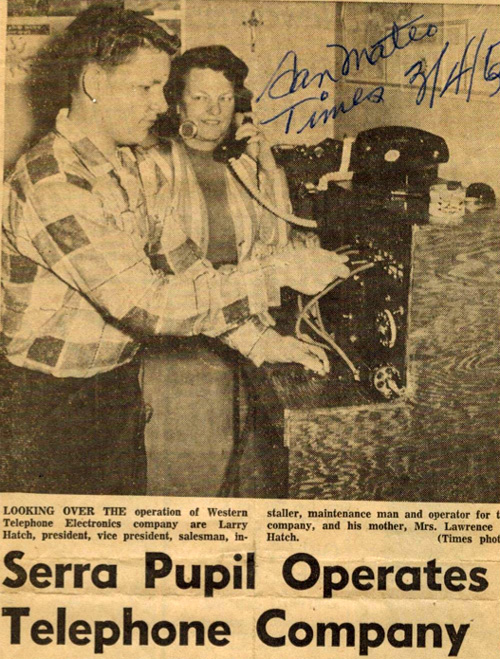 Later in life, Larry’s intellectual prowess persisted. It was no surprise that he eventually became part of the burgeoning computer industry in California where he was born and raised. Larry held many positions starting as a Senior Electronics Technician followed by a long career working for National Semiconductor as an Engineer.

Later, in 1993, Larry branched out on his own as an independent computer contractor. It was during this time that he focused his computer skills on a subject that was always near and dear to his heart – UFOs. Since early childhood, Larry was fascinated with the subject and had some personal experiences that he preferred to keep private.

Larry created from the ground level one of the most robust UFO databases up until that time – the *U* UFO Database. This was a database that the public could use on their home PCs. The *U* Database itself could do queries based on word search, geography, or UFO characteristics. There was also an impressive UFO mapping tool that visually displayed any relevant UFO cases based on your search criteria. This was amazing considering the database was written in a DOS-based environment. 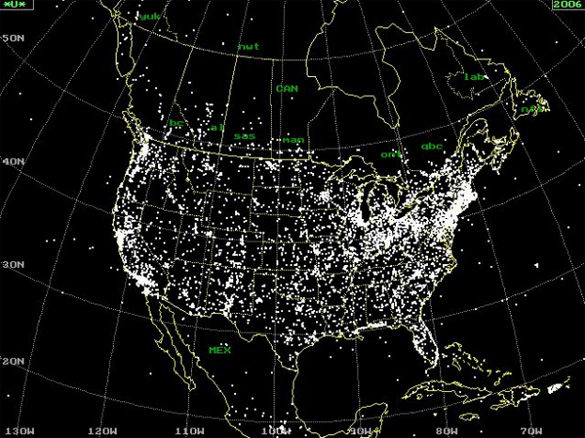 UFO Map from the *U* UFO Database by Larry Hatch

Despite various computer UFO catalogs that had existed, there were only a few computer UFO databases before the *U* Database’s creation. There were the IBM punch data cards employed by the Battelle Memorial Institute in the 1950s used to examine Project Blue Book cases. Then, based on this concept, there was another computer database, compiled at Northwestern University in the 1960s. This included all unidentified cases from Project Blue Book through the efforts of Dr. J. Allen Hynek, Jacques Vallee, et al. This work was eventually turned over to the Condon study at the University of Colorado in 1968 and eventually formed the basis for David Saunders’ UFOCAT database. Other UFOCAT versions were to follow in subsequent years.

The *U* Database also had several updates in later years after its release in 1994 when I first heard of Larry’s creation. Obviously, I had to have a copy for my own UFO research and purchased one of the first versions. After my initial contact with Larry, I had a number of emails interspersed with a few phone calls in the early to mid-nineties. In maintaining ties with him, I was always on the list for any later software updates but also was in a position to eventually provide case material for his latest 2002 update.

Larry had spent thousands of hours combing every possible UFO book and periodical he could get his hands on. In doing so, he took each case documented therein and then converted it into code for database entry. The last tally I saw was over 17,000 UFO cases that Larry personally entered into the database! Most of us cannot imagine the time, dedication, and personal sacrifice he made doing all of this work.

Although he was the sole individual that did all the data entry, he was not alone in gathering the relevant UFO case files and information. Despite avoiding the social scene, Larry was well connected with leading UFO researchers and historians worldwide. Some of these included: Jan Aldrich, Barry Greenwood, Jacques Vallee, Dominique Weinstein, etc.

Jan Aldrich recently informed me that his role was two-fold in collaborating with Larry. First, to properly vet the UFO data for removal of IFO reports or spurious cases. Second, to add interesting cases not formerly in the system. Jan emphasized Larry’s continual work in this area to ensure not only the quantity of information but quality information.

Additional reflections on Larry’s work were conveyed to me by Vallee in the writing of this article. Vallee stated,

“From my point of view, the most memorable lesson from his life is the observation of how much good research can be done by a single person with talent and the willingness to pursue a well-focused goal. Larry single-handedly accomplished what the leading UFO organizations of the time were unable to do with their resources, membership fees and access to media: an effective, well-functioning, cleverly interfaced graphic database of important UFO events! He also managed to build it in a way that made it economically accessible and legible to hundreds of people, on personal computers.”

“I was part of Larry’s extensive correspondence network and brought him items that might be of interest in his work. I enjoyed visiting his house “down the Peninsula” and discussing the sightings, as well as gossiping about technology trends: He was indeed a very gifted software designer and implementer, and a kind man with no interest in the quarrels that plagued ufology. He remains an inspiration to me.”

The saddest part regarding the life of the *U* Database was that it was written in a DOS environment. As technology began to improve with numerous versions of Microsoft Windows and Macintosh or Mac computers, the DOS platform went the way of the dinosaur. Consumers then, like today, wanted the latest and greatest. As a result, DOS-based software programs and their followers diminished. So too did the *U* Database audience – for the most part. 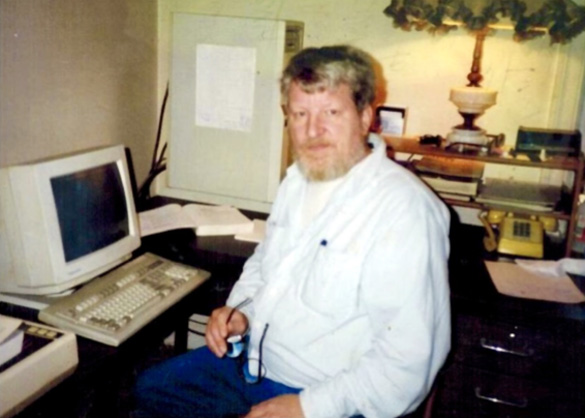 Over time, I eventually lost touch with Larry in the early 2000s. I always meant to re-connect at some point. But I had heard rumors years later through the UFO grapevine that he was in ill-health. I had also heard that he retired to a nursing home. However, in speaking with older researchers who knew Larry more than myself, they too weren’t 100% sure what his status was at the time. It was a mystery.

Recently in November of 2018, after many years of losing touch with Larry, I saw items for sale on eBay that stated they were from the Larry Hatch collection. Eager to have these for my UFO research library, I purchased the items. I noticed the return address had the name of the seller, Yvonne Hatch. I thought to myself this must be a relative of Larry’s. My suspicions were proven correct.

I was able to email and then eventually call Yvonne Hatch who turned out to be Larry’s niece. She regrettably informed me that her late-uncle had passed away due to medical complications on August 3rd, 2018. She and other family members were dealing with the aftermath of his passing. This is what resulted in some of his UFO items surfacing on eBay.

Yvonne was gracious with her time, and she told me things about Larry I did not know from his personal life. She provided the photos included with this article. Yvonne stated her late-uncle was a man of high-intellect who had a passion for the subject of UFOs as evidenced by his tenacious data gathering and data entry that ultimately created the *U* Database. From the conversations we had, I could also feel the bond she had with her uncle and the subsequent loss with his passing.

I am not ashamed to admit that I have in my UFO research room to this day a fully-functioning DOS-based computer that is still running my version of the *U* Database. It was and continues to be extremely instrumental in my UFO studies. When fellow-researchers come to visit, I always try to make it a point to introduce them to the database as it proves useful in many research endeavors.

But more importantly, I tell them about the creator of the *U* Database, Larry Hatch. He was a man who was never to be seen at a UFO conference or UFO meeting. He never wanted to be the focus of attention. Instead, he wanted to be a facilitator in providing UFO data in a manageable form for serious researchers. To that end, he succeeded – admirably.

I wanted to pay tribute to Larry and let the UFO community know about his demise. But, as in these types of situations, not to just mourn his passing. It is a time to also celebrate the man’s contributions to the UFO research field. I hope memories of him and his *U* Database will live on. As Vallee stated, “He remains an inspiration.”

Download this PDF with information about the *U* UFO Database.

David is an author, lecturer, and researcher. He has actively investigated and researched UFOs for 28 years. He joined The Mutual UFO Network (MUFON) in 1990 and has served as Field Investigator, State Section Director, as well as Illinois State Director. David is currently an independent UFO researcher. He has discussed the subject of UFOs on several radio and television news programs over the years. He has also lectured on the subject to numerous school and adult audiences including at the university level. David has assisted the History, Learning, Discovery, Science, and Smithsonian Channel on UFO documentaries over the years in addition to independent productions. David has one of the largest personal libraries of UFO books, journals, magazines, newspapers, and case files from around the world that covers the last 65 years. His book, Triangular UFOs: An Estimate of the Situation, provides a comprehensive analysis of triangular UFOs. He has collected, collated, and analyzed hundreds of reports. In the process, he has created a detailed profile of these objects and written a rich narrative of their history.