An Irish astronomer claims to have successfully tracked UFOs as they fly around the earth. 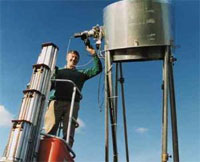 Eamonn Ansbro being lifted to a telescope. (credit: Irishcentral.com)

An Irish astronomer claims to have successfully tracked UFOs as they fly around the earth. Eamonn Ansbro has researched UFOs for the past 20 years. And not only has he seen UFOs, but through his observations, Ansbro has concluded that they follow defined flight paths around the earth. He has a camera array consisting of eleven different cameras set up in his hometown of Boyle that have enabled him to conduct his research. This array monitors the entire sky all day and all night, recording anything that moves. The compilation of data from these cameras is what led Ansbro to his conclusion that UFOs are circling earth.

Ansbro, who is a member of a group called OSETI (Optical Search for Extra-Terrestrial Intelligence), wants to establish a UFO center in his hometown of Boyle, citing the potential for tourism.