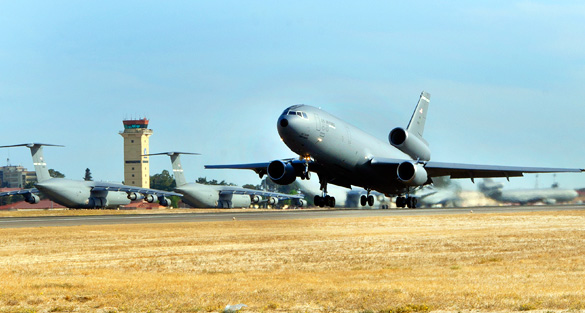 Investigation of UFO over Travis Air Force Base among unidentified

I recently wrote about the United States Air Force’s files on their investigation of UFOs, Project Blue Book, and how they have recently become more accessible. The news regarding these files has become a big national story, albeit much of the coverage has been inaccurate. 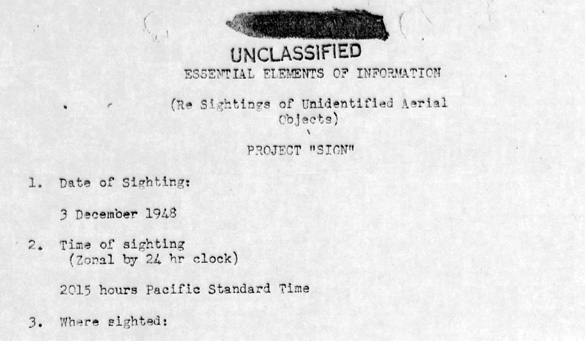 Among the cases listed as unidentified in Project Blue Book, there are many that left investigators baffled, and this is one of them. Originally investigated by Project Sign, which eventually turned into Project Blue Book, this sighting took place on December 3, 1948 at Fairfield-Suisun Air Force Base in California, now named Travis Air Force Base.

At approximately 8:15 p.m., the base control tower was manned by two airmen, a sergeant and a private first class. The private noticed an object about 2 miles north of the control tower. It was flying at an estimated 500 to 1000 feet and climbing slowly. It was moving fast. He estimated it to be 400 miles per hour. The private rushed to the side of the tower closest to the object. The object then slowed to about half its previous speed. The private estimated at this point it was at an altitude of about 1500 feet. He says the object also began to slightly undulate in a “bouncing” motion. 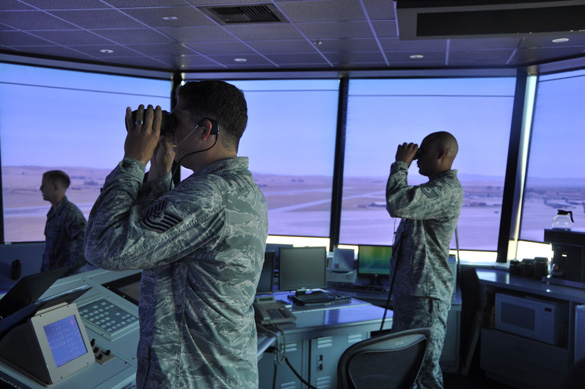 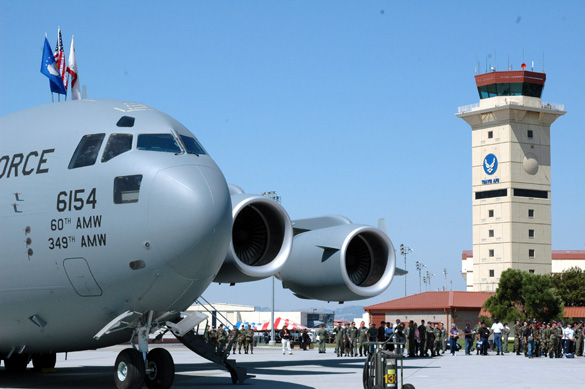 The object then suddenly began to climb nearly straight up until it reached an estimated 3000 feet and leveled off. By now the sergeant was also watching the object. He asked the private to call the Airborne Air Control Operations Officer while he continued to observe the object.

The sergeant says soon after the private went to make the call, the object shot up quickly to the south-southeast until it reached about 20,000 feet. He then lost sight of it.

The airmen had been able to view the object using 8-power binoculars, and described the object as a circular light between one and two feet in diameter. They compared the size to one of the base’s high-intensity runway lamps. As for the shape of the object, they said it was so bright that it distorted the silhouette of whatever the object’s true shape may have been. 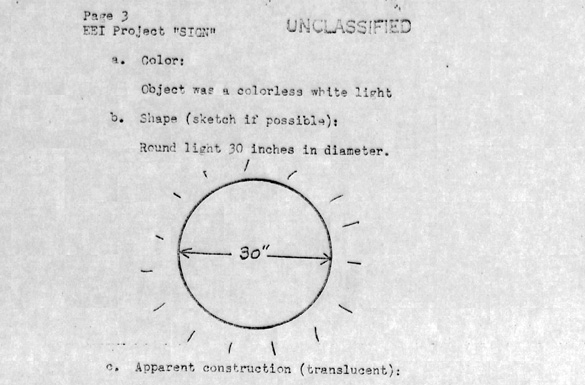 The object could be seen with the naked eye, as the light was bright, but not blinding. The private was certain that it was not a navigational light from an aircraft. Neither of the witnesses heard the object making any sound. Nor did they see any sort of trail left by it. It was a clear night, and the tower instruments indicated there was a 10 mile per hour wind blowing to the southwest. The two control tower operators were the only witnesses of the UFO and the object was not caught on radar.

The Air Force investigators looked into the backgrounds of the two witnesses in order to establish their credibility. They found that they had no police records, and were “considered fully reliable, competent airmen by their fellow NCO’s [sic].”

It was also noted that their normal duties required them to know colors, estimate the speed of moving aircraft, and estimate size and distance. The investigators concluded, “AACS officer in charge of the observers consider them high type individuals fully qualified both mentally and physically for control tower duty: they are considered competent, reliable observers psychologically stable [sic].” 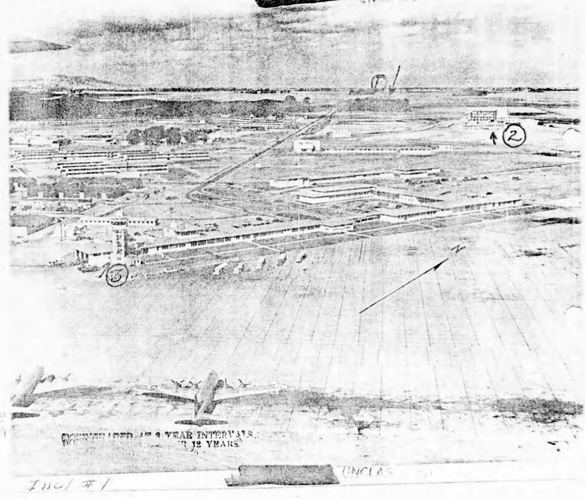 Picture of the Travis AFB control tower with the track of the UFO from the Project Blue Book file. (Credit: USAF/National Archives) 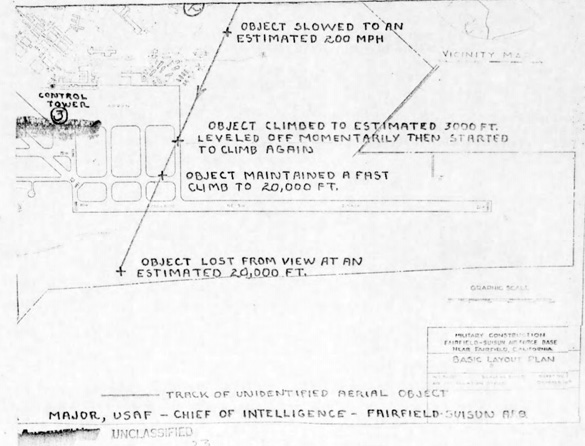 Map of Travis AFB with the track of the UFO from the Project Blue Book file. (Credit: USAF/National Archives)

Having established the credibility of the airmen, investigators then looked to the object. First, they checked if there were any known launches of weather balloons in the area. They found there had been a launch 35 to 45 minutes prior to the sightings. However, the balloon could no longer be seen from the base 10 minutes after it was launched.

A meteorological assessment was also completed. The object was first compared to a fireball. It was noted that even trained observers can be fooled by fireballs. Often fireballs are reported to have fallen nearby when in actuality they are hundreds of miles away. It was also noted that they can appear to move up depending on the slant when they enter the earth’s atmosphere. However, the analyst concluded that “a fireball would not come into view at 1000’ and rise to 20,000’.” Thus, “an astronomical interpretation for the incident can be ruled out.”

The sighting seemed to garner extra scrutiny, as did all of the unidentified cases. One of the files in the report is a relaying of the events from the witness that was a private to Major Arthur Conradi Jr., the USAF Chief of Intelligence at Wright-Patterson Air Force Base. The report to Major Conradi Jr. may have been part of a reevaluation of unidentified cases that was conducted by Project Grudge, Sign’s successor and Blue Books precursor, in 1949.

Dr. J. Allen Hynek, at the time a professor in the Department of Physics and Astronomy at Ohio State University and a consultant for Project Grudge, listed this case under, “Evidence offered suggests no explanation.”

Dr. Hynek’s list of Project Blue Book cases that were unsolved. This list convinced him that UFOs were worthy of scientific investigation. (Credit: USAF/National Archives)

This case, due to the high credibility and regard for the witnesses, and the mysterious nature of the unidentified object they observed, has remained unidentified. It is another example of a great case that underwent a high level of scrutiny only to remain one of hundreds of unidentified objects in the U.S. Air Force’s UFO files.

You can find the original Air Force documents at ProjectBlueBook.TheBlackVault.com.

A version of this story first appeared in the April/May 2014 issue of Open Minds Magazine. A hard copy of that issue can be purchased here.