Images from a camera have apparently provided the most detailed view to date of the far side of Earth's moon.

Images of moon’s far side? 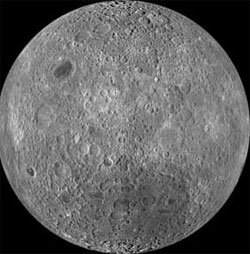 Image of the moon's far side (credit: NASA/Arizona State University)

Some question the accuracy of a composite image created from 15,000 separate images, but scientists are excited about the image nonetheless.

Scientists say the surface of the far side of the moon is much rougher than its near side.