A large crop circle has appeared overnight in the South West England county of Dorset. Although the Daily Mail is reporting it to be the first for the 2014 season, there have actually been dozens of crop circles reported this summer, according to the Crop Circle Connector website. Either way, the crop circle in Dorset is certainly one of the most spectacular.

The formation in Dorset was filmed by amateur pilot and crop circle enthusiast Mathew Williams. He told the Daily Mail, “Whoever, or whatever, created the shape must have been there all night – you have to really admire their handiwork.” 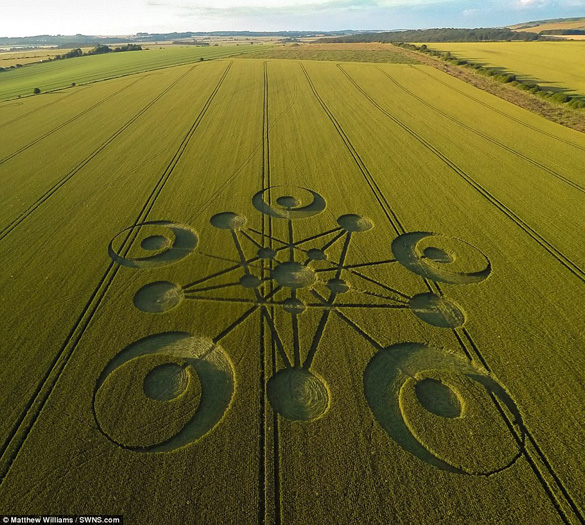 An image of the crop circle found near Blandford Forum in the county of Dorset in South West England. (Credit: Mathew Williams/SWNS.com)

The pattern in Dorset was laid down in a field of wheat, which is the most common crop the formations made in July are found in. This is the month when wheat is harvested. Veteran crop circle maker John Lundberg told the BBC, “[Wheat is] the best crop to work in, that’s when the most spectacular circles appear. Because each stem is upright, you can get pin sharp clarity.”

The Dorset pattern is over 400 feet long, and is made up of a star pattern with circles within circles.

Williams says, “Last summer we didn’t get many circles, but this beauty certainly makes up for that.”

Williams says the decrease in the number of crop circles being made is due to farmers getting more and more frustrated by the loss of crops and the tourist who come to visit the circles. Williams says many of the great crop circle makers are afraid of getting fined, and have thus stopped making the circles.

Thus far, Williams himself is the only crop circle maker to ever get fined. He was fined £100 after being busted for creating a crop circle in 2000. He has since stopped making crop circles, not because of fines, but because he has developed hay fever. 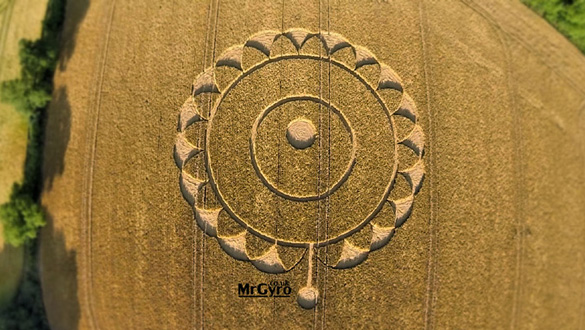 Although it is obvious many of the crop circles are created by human beings, awe inspiring formations, like the one in Dorset, cause people to wonder if perhaps some of them are created by extraterrestrials or have some other paranormal origins.

Last year, Williams told the Daily Express that he has had paranormal experiences out in the fields while making crop circles.

Williams said, “I’ve seen small balls of light which have entered the field and chased us out on one occasion. I’ve seen them passing overhead. On two occasions we’ve also seen black, shadowy figures. Not as clear as a person, a little more rounded but a human shape. There are so many things like that. When teams of people go out into the fields and make large talismanic magical symbols, somehow that does actually have some effect on physical reality and strange things happen.”

According to Williams, he is not the only one who experiences paranormal activity out in the field. He says all of the crop circle teams he is aware of have had similar experiences.