George Lucas is among those who believe the world is coming to an end in 2012. 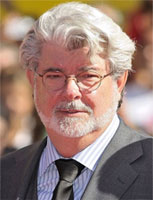 Filmmaker George Lucas is among those who believe the world is coming to an end in 2012.

According to actor Seth Rogan, Lucas recently spent more than twenty minutes telling him how 2012 will be the end of the world. Recalling the encounter, Rogan told the Toronto Sun, “George Lucas sits down and seriously proceeds to talk for around 25 minutes about how he thinks the world is gonna end in the year 2012, like, for real. He thinks it.”

Steven Spielberg was apparently also present for this discussion. But according to Rogan, Spielberg simply rolled his eyes and said, “My nerdy friend won’t shut up, I’m sorry . . .”

Despite whether or not Earth will still exist after 2012, one scientist believes there will be two suns in the sky. Dr. Brad Carter, Senior Lecturer of Physics at the University of Southern Queensland, thinks Betelgeuse, one of the brightest stars in the sky, is collapsing. He says the star might run out of fuel, and if it does, it could go super-nova at any time. If that happens, a second sun would be visible in the sky, at least for a few weeks—an image reminiscent of a scene in Geroge Lucas’ Star Wars.
2012 George Lucas News UFO UFO News 2011-01-20
Jason McClellan
Previous: Daily UFO Headlines 1/20/11
Next: Daily UFO Headlines 1/21/11