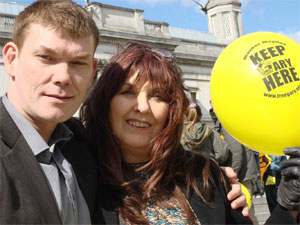 Janis Sharp, mother of the UK “UFO Hacker” Gary McKinnon, has demanded to meet with Deputy Prime Minister Nick Clegg. Sharp told Welwyn Hatfield Times, “I’ve written to him [Nick Clegg] at his constituency and at Parliament to ask for a meeting with him.” Sharp wants to urge Clegg to honor the pledge he made before his election—to stop McKinnon’s extradition to the U.S. According to Welwyn Hatfield Times, one of Clegg’s representatives stated, “I can confirm the Deputy Prime Minister has received the letter and will respond in due course.”

McKinnon is wanted by the U.S. for hacking into Pentagon and NASA computers searching of evidence of UFOs more than a decade ago.