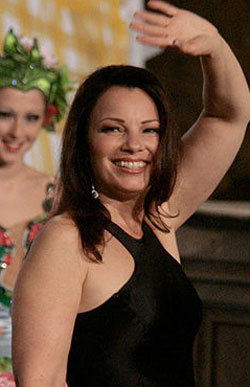 Fran Drescher claims she was abducted by extraterrestrials.

The actress, best known for her role as the title character on the 90s sitcom The Nanny, recently told the Huffington Post that both she and her ex-husband were abducted by extraterrestrials before they met each other. And she claims the situations in which they were each abducted are similar. She explained that her abduction occurred when she in junior high, driving down the road with her father. Her ex-husband, also in junior high at the time, was abducted while driving down the road with his father.

Drescher stated, “A few years later, we met, and we realized that we had the same experience. I think that somehow we were programmed to meet.” She even theorizes that an alien implant could be how the extraterrestrials programmed her actions. And she claims her ex-husband has one too. She explained, “We both have this scar. It’s the exact same scar on the exact same spot . . . that’s where the chip is.”