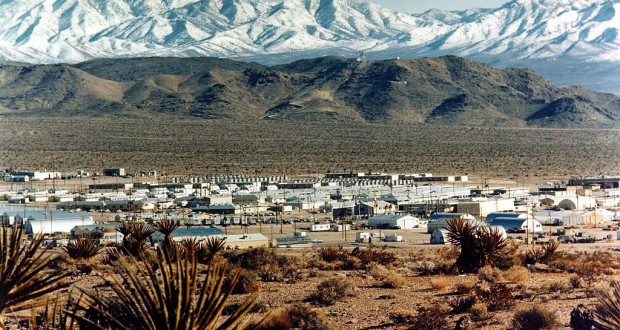 Mercury, the Main Base Camp at NTS, is linked to Las Vegas by U.S. Highway 95. The camp provides overnight accommodations for more than 950 people. It is a warehousing, communication, repair, fabrication and field administration center. Facilities include a hospital, theater, bowling alley, cafeteria, and post office. There are no schools or family housing. (Credit: Wikimedia Commons)

A former airman in the USAF recalls an incident from 1972 near Mercury, TX, along a lonely stretch of highway that includes missing time, according to testimony in Case 63625 from the Mutual UFO Network (MUFON) witness reporting database.

The airman was stationed at Keno AFS, Oregon, out of Kingsley Field.

“I was a Radar Height Operator during my time there on the mountain. I received orders to go to Udorn, Thailand in 1972. In August of 1972 I packed my family with wife at that time, and young daughter who was born in May of 1971, and a young Labrador Retriever puppy. We were heading to Laredo, TX, for some leave, where both our families resided and my wife would be living with her parents while I was away.”

The witness describes the trip.

“I was driving a 1971 Mustang Mach I, and towing a trailer with most of our belongings on it. I remember we left in the early afternoon and intended to stop only as necessary so as to make it home as soon as possible. The Labrador puppy had been given a small dosage of tranquilizer pills by the base vet so as to keep him calm and sleep since he was riding in a dog carrier at tailgate of the trailer. He was very comfortable and I foresaw no problems as long as we kept to our schedule. The baby was fed and asleep in the back seat where we had set up a make shift crib.”

Then the witness noticed something unusual during the drive along a desolate area.

“At about 2 a.m. we were heading west on a long dark stretch of road but could see it was one of those roads that went on forever and then over a distant hill, more highway if you know what I mean. My wife was asleep when I first saw what looked to be some sort of a road block set-up ahead about a mile ahead.”

The witness described the upcoming scene.

“I could see the reflection of the cross stripes on a low wooden type structure – which is why I thought of it as a road block. But I started to wonder why a roadblock at this time? I was traveling at about 70 mph. So I knew I would soon come up to it. I woke up my wife to see if she saw the same thing. I started to slow down anyway because I am a law abiding person, used to taking orders.” 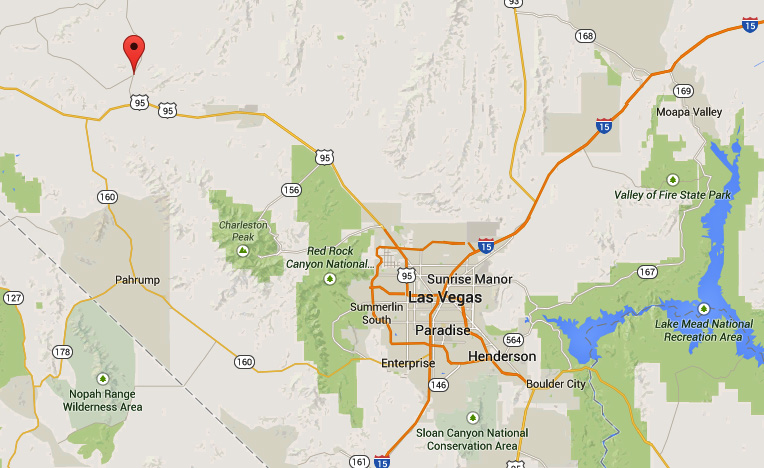 But as they got closer, it looked more unusual.

“As I got closer I saw no one at the road block, just the low road block structure strung across the right side of the highway. I was about one city block length away from the road block and still no one manning it.”

Then the witness began to hear his dog.

“Suddenly our puppy in the back started to howl, but not like a puppy howl or yelp, but like some sort of monster from Hell and very loud howling and just continued to do so till after we passed this area. All my hair stood up on the back of my neck.”

The couple felt that they were somehow in danger.

“My wife and I looked at each other and I hit the gas pedal, feeling very much in danger. Something told me to go and not stop, which I obeyed. I swept around the roadblock on its left side. My wife and I both looked to our right. There was a strange set up and it looked like three daises (raised platform) raised around a cleared center area, like a basketball court with bleachers, but one side missing. Very bright lights illuminated it. One dais was facing south and about 100 feet across more or less and the other two facing each other east and west about same length and all three connected with the south side open.”

The witness described people in the area.

“In this area were many men, or not, very white in coloring and they were all wearing what I saw was bright blue overalls and scampering around. There were many pieces of equipment around the inset of the dais but the center part was clear almost like a short runway or large landing pad.”

“My wife said she saw the same thing except that she saw them wearing white overalls and that they all looked bluish in coloring to her. I looked in the side mirrors and no one was following us. No lights. No police – nothing. I was going about 75 mph and didn’t slow down for at least 30 minutes to an hour. I did slow down though and saw that my wife was still nervous, but that our daughter was still fast asleep and the puppy was quiet.”

The witness said he needed a place to pull over.

“I started to look for a place to stop and rest, with people around. I saw a light to our right in the near distance just off the highway, so I slowed down and carefully pulled into what looked like an old style storefront parking area with a light swinging in the warm desert breeze from the store and I remember it even made that rusty sound as it swung back and forth.”

The witness thought it was a good place to stop for the night.

“I told my wife we would stay here and in the morning we could get something to eat or drink there. We agreed. I remember getting out of the car and I could see the outline of the store front as I went in back and relieved myself before getting back into the car.”

But then his next memory would change everything.

“Next thing I remember there was a sharp knocking on my car window. It was a man checking to see if we were alright. I woke up fully and remembered that I felt as though I had slept for a hundred years, the best I had ever felt or since and fully energized and alive. The man was not excited and said he wanted to know how the accident happened? I said what accident? He said yours. He said you are 200 feet from the highway, sitting in the middle of the desert. I just happened to see you as I was driving by. He asked if we were alright. I looked around. My wife was just waking up and my daughter was still fast asleep. I said yes I feel great.”

Then the witness checked his surroundings more carefully.

“I looked around. There was no storefront – no store sign swinging in the breeze and no store. We were in a clearing off the highway. It was a bright sunny day. My reaction at that time was nonchalant and very strange when I look back at it. I checked on the puppy. He was fine. The car and trailer looked fine. I looked like I pulled off the highway in a straight line to the position I was found in.”

The witness also noticed something odd about the truck driver – wondering how he had noticed them.
“I did notice that the truck driver was driving what is typically called an 18 wheeler and that he was parked far to the left on the highway of where we ended up. I thought at that time, boy he must have great eyesight. He said go ahead and pull off the road to be sure the car is okay.”

At this time the witness noticed damage to his trailer.

“As I did this I noticed a bump in the trailer axle. Upon further inspection I could see it was bent. I can’t think of anyway it could happen unless I pulled off and hit something the night prior, but I remember being careful. I thanked the truck driver without exchanging any information nor did he offer any.”

The witness pulled away and continued on his journey.

“Anyway I was regulated to going about 45 mph until we hit the next town. I am not sure, but I think it was Mercury, Nevada. At this small town I stopped at a service station that told me the trailer was ruined and too dangerous to continue with it. Being an airman at the time I had little money to rent another one so instead I sold some our belongings and gave the rest away along with the puppy to the service station owner. We took it all in stride and just kept going.”

But the events of that night eventually began to bother the witness.

“It only started to bother me years later. By 1981 I had divorced my then wife and life went on. But I still speak to her on occasion and this incident does come up and she still remembers the same thing. I did not report this sooner because of my position with the USAF. I later worked in Air Force Intelligence and as a crew member of an E3training squadron. I then worked for a U.S. Government agency where I also feared some sort of repercussions. I am now retired. This happened a long time ago. Even if it falls along the parameters of the Secrets Act, it has been about 40 years and by now should be declassified.”

Mercury is a closed city in Nye County, NV, five miles north of U.S. Route 95 at a point 65 miles northwest of Las Vegas. It is situated within the Nevada Test Site and was constructed by the Atomic Energy Commission to house and service the staff of the test site. The specific site was known as Jackass Flats, NV, and nearby Nevada Test Site 400.Today, the site is governed by the United States Department of Energy. As part of the test site, the town is not accessible to the general public. It was named after the mercury mines which flourished in its general vicinity a century before the town itself was established. The current population is unknown.