Dave Grohl, founder and lead singer of the band Foo Fighters, recently commented on the naming of his band. 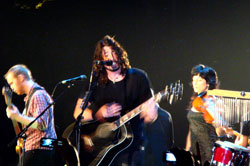 Dave Grohl, founder and lead singer of the band Foo Fighters, recently commented on the naming of his band.

Grohl began working on material for Foo Fighters in 1994 after the dissolution of his former band Nirvana. At the time, Grohl was reading many books on a topic with which he has a great fascination – UFOs. In a recent interview with Clash Music, Grohl explained, “I had recorded the first record by myself, playing all the instruments, but I wanted people to think that it was a group. I figured that Foo Fighters (WWII term for UFOs) might lead people to believe that it was more than just one guy. Silly, huh?”

Grohl admits that, if he had thought the band would turn into a career, he would have most likely chosen a different name for the band.