A Florida witness at Ocala reported watching and videotaping a fast approaching, bright sphere UFO that hovered in place before moving away toward the ground level, according to testimony in Case 78114 from the Mutual UFO Network (MUFON) witness reporting database.

The witness and a friend stepped outside onto a porch to watch an approaching storm system about 8:30 p.m. on July 31, 2016, when the incident occurred.

“I noticed a look on her face that caught my attention and immediately upon looking south I noticed a very brightly lit ‘sphere’ moving towards us rather quickly from the distant sky to the south,” the witness stated.“It was so bright and moving so quickly that it gave the appearance of being close. The color was a bluish tint but did not appear to be casting light in any direction.” 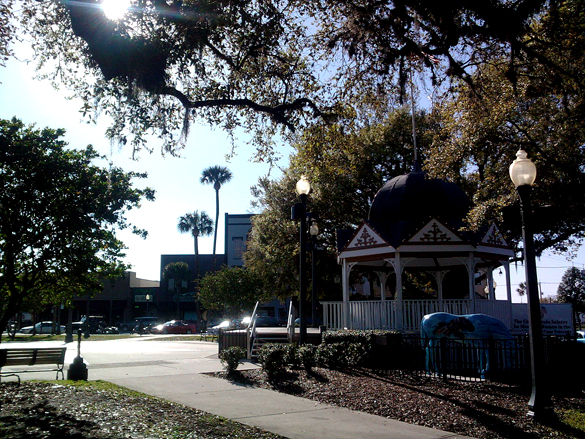 The witness was alarmed at the speed that UFO moved. Pictured: Ocala, Florida. (Credit: Wikimedia Commons)

The object then moved closer to the witnesses.

“As the object got closer it abruptly stopped and hoovered perfectly still for multiple minutes. At this point I began recording with my cell phone. After about 90 seconds, the sphere flashed off and left just a blinking, or pulsating red light.”

The friend then left the property for a better look.

“At this point my friend took off down the road to try and get a different view and possibly see what size the object was. When the craft went to a blinking red light I could see several other red lights further away. I recorded a couple more minutes of the flashing red before it began moving again. It did a couple circular patterns before returning to its fully illuminated state.”

The object appeared to move away.

“At this point it descended below the tree level and began moving from right to left. I could see it through the trees before it disappeared out of sight. I kept the camera rolling because I noticed a strange amount of car horns honking and dogs barking after the craft disappeared until my friend came back from down the street. She reported the same things I saw from the house to include the hovering, changes of color, and the apparent descent down out of view. She said that it was much bigger than a drone and had no apparent characteristics of a helicopter.”

The witness felt that the object had unusual characteristics.

“I want to mention that the red flashing appeared very distant and dim, but the illuminating glow was shockingly bright making it hard to judge distance. I had a strange feeling that what we were seeing wasn’t meant to be seen and it even made me feel afraid. Heavy breathing and very high heart rate during the 10-minute ordeal.”

The case was investigated by Florida Chief Investigator John A. Gagnon and closed as an Unknown. 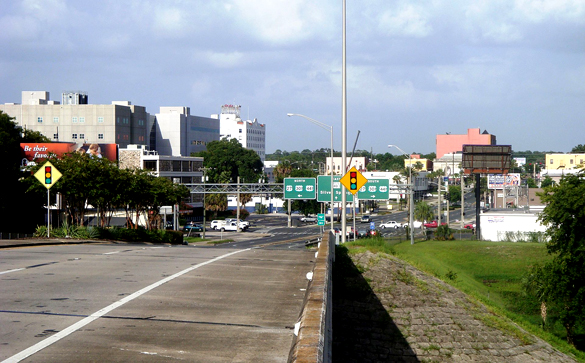 The witness stated that the object ‘stopped on a dime’ and hovered in place before moving on. Pictured: Ocala, Florida. (Credit: Wikimedia Commons)

Gagnon summarized and concluded the case.

“At first thought, Chinese Lanterns came to mind,” he stated in his report.“That is, until, during the interview the witness estimated the speed at which the object approached was between 2,000 and 2,500 mph. Witness has a four-year history of military service with the U.S. Air Force. During that time, he worked in areas where he was in the vicinity of different types of airplanes. He states he is familiar with different types of fighters, cargo planes and their flight characteristics. He described this object as a sphere that was light itself. There did not appear to be an actual object there, just light. The light did not project out from the object. Witness also stated that as the object came zooming toward him at approximately 2,000 – 2,500 mph, it suddenly stopped on a dime, and then hovered for a few minutes before starting a descent behind some trees. He watched as it moved just above ground behind some trees. It then disappeared.”

Gagnon did mention the case for a drone in his report. “There are known cases of a person flying a small drone during a thunderstorm to try to get great video shots. Drones can be dressed up with LED light kits. At night, without a frame of reference, an object might appear to be moving much faster than it is.”

The case was closed as an Unknown.

“That said, this case will show a disposition of Unknown UAV.”

Ocala is a city in northern Florida, population 57,468. Please remember that most UFO sightings can be explained as something natural or man-made. The above quotes were edited for clarity. Please report UFO activity to MUFON.com.