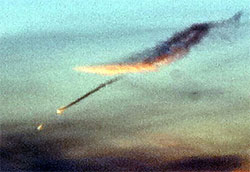 Oswego, Illinois resident Brandon Tudor photographed a fireball UFO in the sky on Sunday evening. Tudor described the object as a ball of fire falling towards Earth. According to the Beacon-News, the witness stated that the object changed direction as it fell. Tudor also claims that he saw “two jets fly into view and circle the area” after the UFO disappeared. He took four pictures of the UFO on his iPhone before the object vanished.

Tudor took to the Internet to see if anyone else had seen the UFO. He also made several phone calls. He even looked for answers on the website AboveTopSecret.com, but he is still on the quest to discover the identity of the UFO.

While other witnesses have yet to come forward, the object was also witnessed by Tudor’s daughter, who pointed to the sky and said, “I told you aliens existed.”