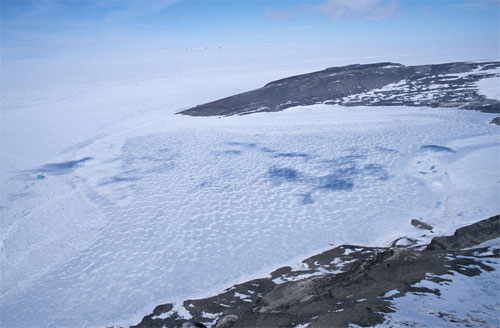 A team of scientists recently discovered 100,000-year-old microbes in a lake beneath the ice in Antarctica.

Scientists continue to study extreme environments on Earth to better understand the types of environments in which life could exist elsewhere in the universe. In a recent study, scientists from the British Antarctic Survey (BAS) and the Universities of Northumbria and Edinburgh drilled through a thin ice layer (approximately 10 feet) to reach Lake Hodgson on the Antarctic Peninsula. A British Antarctic Survey press release describes: 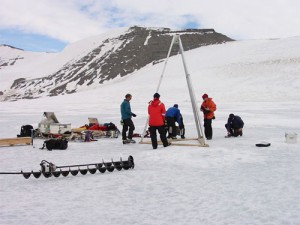 The lake was thought to be a harsh environment for any form of life but the layers of mud at the bottom of the lake represent a time capsule storing the DNA of the microbes which have lived there throughout the millennia. The top few centimetres of the core contained current and recent organisms which inhabit the lake but once the core reached 3.2 m deep the microbes found most likely date back nearly 100,000 years.

The team’s preliminary findings were published in the online journal Diversity. David Pearce, the study’s lead author, notes, “What was surprising was the high biomass and diversity we found. This is the first time microbes have been identified living in the sediments of a subglacial Antarctic lake and indicates that life can exist and potentially thrive in environments we would consider too extreme.” These extremophiles use a variety of chemical methods to sustain life both with and without oxygen. According to the British Antarctic Survey, many of the species collected from Lake Hodgson “are likely to be new to science,” so scientists are anxious to investigate these life forms.

In November 2012, researchers discovered a “diverse and thriving community of microbes” in Lake Vida, another subglacial lake in Antarctica.

This type of research and these discoveries provide scientists with clues for how life might survive on alien planets.