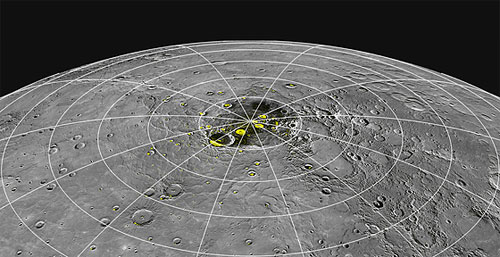 Evidence points to water ice and organics on Mercury

Large amounts of water ice and possible organic compounds were recently discovered on the planet Mercury.

NASA announced on Thursday, November 29 that data from the Messenger spacecraft indicates there is between 100 billion and 1 trillion metric tons of water ice in permanently shadowed areas near Mercury’s poles. Temperatures can reach 800 degrees Fahrenheit on this scorched planet. But in the planet’s permanently shadowed regions, temperatures can drop to minus 370 degrees Fahrenheit. 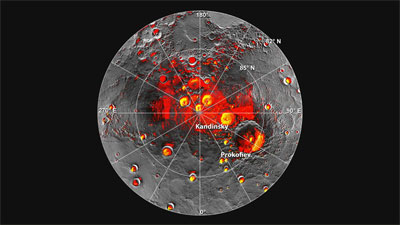 Space.com explains that Messenger’s data also indicates that much more frozen water is present in slightly warmer areas on Mercury, buried beneath a “strange dark material that acts as an insulator.” According to researchers, this dark material is likely “a mixture of complex organic compounds, the carbon-containing building blocks of life as we know it.” Messenger participating scientist David Paige of UCLA explains, “This organic material may be the same type of organic material that ultimately gave rise to life on Earth.”

Researchers think finding life on Mercury is a long shot, but these latest discoveries have astrobiologists paying more attention to our sun’s closest neighbor.