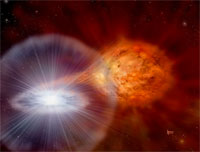 Recent discoveries have added to the mounting evidence making it likely that extraterrestrial life does exist. In the past couple weeks alone, scientists have announced a couple major findings, like the discovery of a new type of bacteria that can live and even thrive in an arsenic environment, which changes our understanding of life. Scientists also recently announced that there are three times as many stars as previously thought, greatly expanding the number of planets that could be home to extraterrestrial life.

In a recently published article on The Huffington Post, Carl Pilcher, director of NASA’s Astrobiology Institute, is quoted as saying, “The evidence is just getting stronger and stronger . . . I think anybody looking at this evidence is going to say, ‘There’s got to be life out there.'”

The new findings by scientists increase the likelihood of discovering extraterrestrial life, but some scientists have been quick to point out that, because this research is new, there are debates over how solid the findings are.