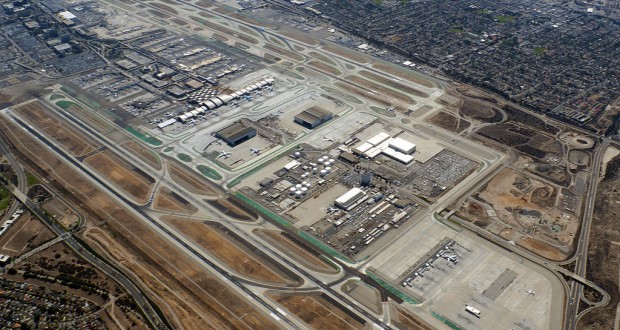 The witness was aboard an airliner at 5:30 p.m. on October 7, 2014, descending into Los Angeles, when a disc-shaped UFO was spotted just three feet from the wing. Pictured: Aerial view of Los Angeles International Airport. (Credit: Wikimedia Commons)

A passenger flying from Chicago to Los Angeles reported watching a disc-shaped object that moved close to the plane, according to testimony in Case 60579 from the Mutual UFO Network (MUFON) witness reporting database.

“I was in the back of the plane looking out the window,” the witness stated.”As we descended we passed a silver sphere.”

The witness described the object’s location very close to the plane.

“It was about four feet around. I got a good look at it because I saw it coming and watched it as we passed it. Definitely not a balloon. I was pretty scared after I saw it because it was so close to the wing. If we had hit it, we would have crashed.”

California MUFON is investigating. California has a current UFO Alert Rating of 5 with a low number of recent reports nationally. California had 66 UFO report in September 2014 – calculated at 1.73 sightings per million population. The above quotes were edited for clarity. Please report UFO activity to MUFON.com.