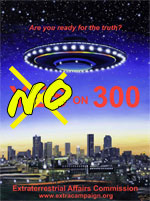 Initiative 300 was strongly shot down by Denver voters last night, with 84% of the voters opposing the creation of a commission that would have looked into UFO reports and published UFO information on the city’s website, among other things. This commission would have been completely funded through grants and donations, costing tax payers nothing. The question posed on the initiative’s literature read, “Are you ready for the truth?” Surprisingly, Denver voters have answered “No.”

Recently, Michael Luckman, a New York author, announced plans to push a similar initiative there. There has been no word yet as to whether or not the results from Denver’s election will deter Luckman from moving forward with his efforts in New York.

**UPDATE**
The final numbers from Tuesday’s election vary, but it appears the results ended up being closer to 70% of the Denver voters opposing this initiative. But while initial reactions have been quick to point out how badly the initiative was defeated, it is important to note how impressive it is that nearly 30% of the voters (more than 50,000 people) were in favor of creating an ET commission. Think about it – that is 50,000 people in one U.S. city alone . . .