The case of Eduard “Billy” Meier is one of the most famous among the UFO enthusiasts. For over 30 years, Meier has claimed to have had direct and continuous contact with extra-terrestrial beings. The case gained substantial credibility among supporters after the work done by Marcel Vogel, an IBM scientist at the time, who analyzed metal samples of alleged extra-terrestrial origin supplied by Meier. While most of the investigations in the Billy Meier case have concentrated on photographic material, not so much has been done on reviewing the scientific part of the famed metal samples.

This article concentrates on the scientific data collected by Vogel from the Meier samples. The results are presented best in the video Beamship: The Metal Analysis, which is part of a 1985 documentary with Jun-Ichi Yaoi from Japan’s Nippon Television. This video is so far the only source to my knowledge that properly displays the data obtained directly from the instruments used by Vogel. Other references, such as “UFO contact from the Pleiades: A preliminary investigation report” by Wendelle C. Stevens, do not show plots of the spectra or scanning electron micrographs and are limited to verbal descriptions of the results and conclusions reached by Vogel [1,2].

The main claims on Meier’s metal samples are the following:

1. Samples contain almost all of the elements of the periodic table.

2. Samples contain the hard to obtain element Thulium with its secondary bands missing in the EDS spectrum.

3. Inclusions in the metal sample exhibit birefringence, which is found in non-metallic or dielectric crystals.

4. Sample examined at a magnification of 500 diameters show signs of micro-manipulation or micro machining.

The claims above have direct data associated to them. Notice that many of the claims that Vogel made are secondary and derive from conclusions he reached from the propositions listed above. The intention of this article is to show that Vogel’s main claims can be scientifically verified based on his own data and that his results can be reproduced out of ordinary materials. The logical argument is that very similar results can be obtained from samples that do not possess the properties that Vogel claims. It is also the intention of this article to propose that, in light of the analysis herein presented, it is no longer necessary to analyze more samples that Meier may supply in the future.

The data from which Vogel claims to have found many elements is a spectrum obtained using Energy-Dispersive X-Ray Spectroscopy (EDS). This spectrum is shown in Fig.1. 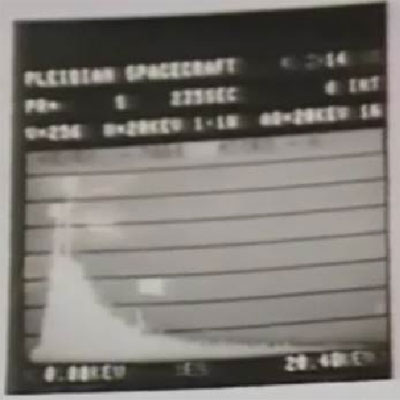 As a counter-example, Fig. 2 shows an EDS spectrum taken at 20KeV of ultra-pure nickel. 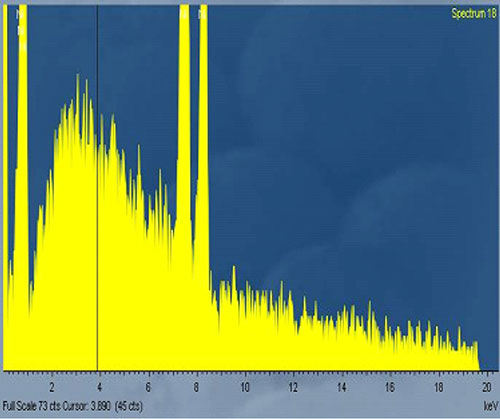 Figure 2: EDS Spectrum at 20KV of ultra-pure nickel. Spectrum captured by I. Alvarado.

Given the similarities of the two spectra above, it can be deduced that the evidence for all the elements present in the sample can be reproduced by a sample consisting of virtually a single element which, in this case, was a pellet of ultra-pure nickel.

The scientific explanation is that the bell-shaped spectrum shown in both spectra is the so-called Bremsstrahlung continuum x-ray radiation, which is produced when electrons decelerate as they pass close to the atomic nuclei of the material. This phenomenon is very well known in EDS analysis and has no bearing on the element composition of the sample [3].

Fig. 3 shows a screen-shot of Vogel’s EDS spectrum where he identifies Thulium and other elements. Here, it is pointed out that the secondary bands of Thulium are not present, which is further used to speculate that the material was put together by unknown methods (e.g. cold fusion). 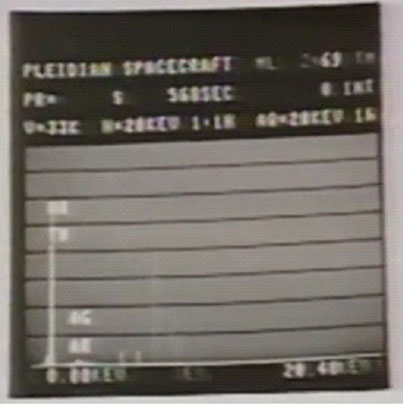 The spectrum shown in Fig. 4 below was produced with a sample made by manually placing a small flake of Silver on top of Aluminum. 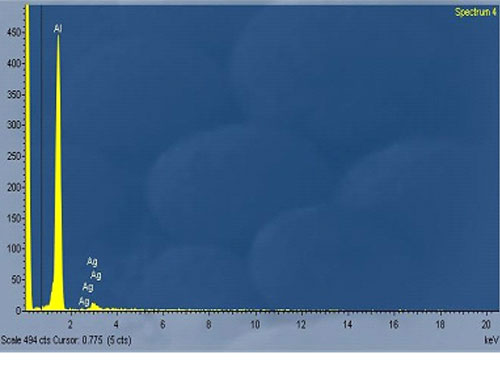 Figure 4: EDS Spectrum at 20KV of a sample consisting of Aluminum and a flake of Silver manually placed on top. The band at 0 KeV is background noise. Spectrum captured by I. Alvarado.

The striking similarity between the two spectra in Figs. 3 and 4 is evident and, thus, what Vogel observed was not the hard-to-obtain Thulium, but rather the very-common element Aluminum with some traces of Silver [4]. The Aluminum and Silver of the sample in Fig. 4 are obviously not bonded or alloyed and yet the sample still produces an EDS spectrum identical to Vogel’s. It then follows that EDS alone cannot determine neither chemical bonding nor alloying between the elements detected. Thus, the claim that the elements found in Meier’s sample are bonded or alloyed cannot be supported by EDS analysis alone. The proposition of the missing bands is then nullified as Aluminum does not possess them.

The scientific explanation of this is that Aluminum has one strong EDS band at 1.486 KeV, which is very close to the lowest energy band produced by Thulium at 1.462 KeV. It is common for a computer analyzing EDS spectra to mistake between elements whose energy bands lie close to each other. This explains why the computer also identified Bromine and Argon in Vogel’s spectrum as they too possess energy bands close to Aluminum and Silver. The presence or absence of secondary bands then becomes important to distinguish between elements. Thus, the spectrum obtained by Vogel is best explained as that produced by a piece of Aluminum with traces of Silver that are not alloyed or chemically bonded.

Vogel claims to have detected dielectric birefringence in inclusions around the edges of the sample by means of optical microscopy with cross-polarized illumination. The sequence of his observation is shown in Fig. 5. Here, Vogel goes on to speculate that the sample exhibits a duality between being a metal and a non-metallic crystal.

Figure 5: Two optical micrographs of the same region of the sample taken by Vogel. Left shows normal illumination and Right cross-polarized illumination. The bright portions on the right are claimed to be produced by crystal birefringence.

Figure 6: Optical micrograph of a metal film poorly deposited onto the surface of a silicon wafer. Left shows normal illumination and Right cross-polarized illumination. The bright streaks on the right are produced by the topography of the surface. Micrographs captured by I. Alvarado with a 50x optical objective.

Just like in Vogel’s micrograph sequence, bright regions are also clearly observed in Fig. 6 under cross polarized light. The difference is now that they are produced merely by the topography of the metal itself and not by non-metallic crystal birefringence. This shows that the cross-polarization method is insufficient to establish whether dielectric birefringence exists in any given sample. Since the sample analyzed by Vogel has a very clear rough surface, the bright regions he observes under cross-polarized light are best explained by the surface topography and not by the presence of non-metallic crystal inclusions in the sample. Since there is no reason to believe that there are insulating portions embedded in Vogel’s metal sample, then severe charge accumulation during SEM imaging is not expected.

Vogel claims to have found evidence of mechanical manipulation at the micro-scale level, presumably done with lasers. This is based on the SEM picture shown in Fig. 7, where the magnification is specified at 500 diameters. 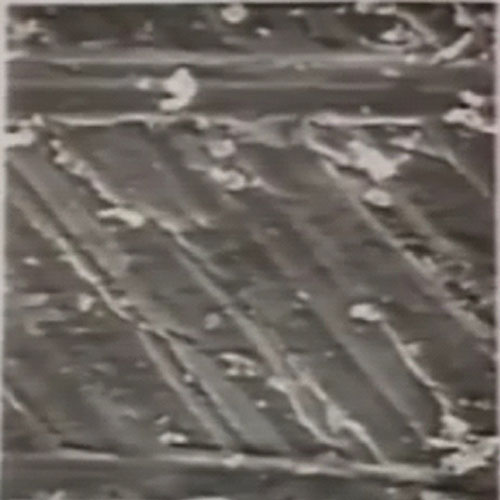 Figure 7: SEM micrograph taken by Vogel showing indentations at the micro scale. The image was taken at 500 diameters magnification.

Fig. 8 shows a SEM micrograph of the surface of an aluminum plate taken at a magnification of 500 diameters as well. This plate was made by conventional metal machining and its surface shows a very clear periodic pattern with a 50 micron pitch that the cutting edge produced during the process. The structure produced was not intentional and has no functionality. Other portions of the same surface did not show this structure. 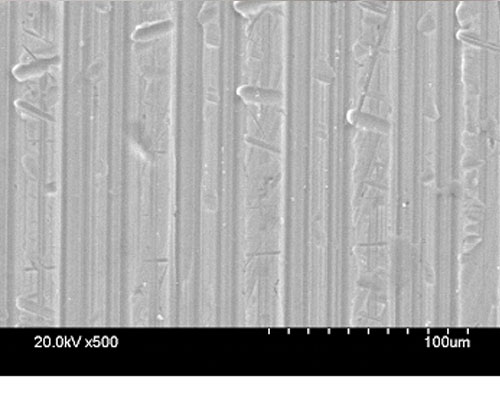 Figure 8: SEM micrograph of the surface of an Aluminum plate machined by conventional means at 500 diameters magnification, as indicated in the lower caption bar. SEM captured by I. Alvarado.

Given that patterns like this can be obtained unintentionally by ordinary metal cutting tools, it is not necessary to speculate on possible exotic micro-machining processes to produce them. Indeed, a structure imaged at 500 diameters cannot be considered micro-machined even by 1985 technology, let alone by today’s state-of-art nanofabrication techniques, which routinely produce structures that are imaged at magnifications of 100,000 diameters [6].

To summarize, all the results obtained by Marcel Vogel have been properly reproduced from common samples using equivalent equipment and techniques. The spectrum showing all the elements of the periodic table was produced by a sample that virtually contains only one element, the spectrum showing Thulium and Silver was obtained out of a sample of non-alloyed Aluminum and Silver, the cross-polarization optical micrographs that are used to show non-metallic birefringence in the sample were reproduced by a purely metallic sample. A similar micro-machined structure was found in an ordinary machined metal. In all the cases, the instruments and techniques used were equivalent to those used by Vogel.

Many of the speculations adduced by Vogel become invalid in light of the counter-examples presented in this article. For instance, the missing bands of Thulium led Vogel to speculate on cold fusion, which becomes unsustainable after showing that the spectrum obtained is that of Aluminum. Speculation of duality metal-dielectric in the sample also is not required as no valid evidence of birefringence was presented. And so on with the rest of the claims.

Furthermore, some of the claims did not have data to support them and even other claims are pure anecdotes. For example, Vogel claimed that Rhenium was found in the sample with missing EDS bands also; the spectrum was not shown in either references [1] or [2] and it could have been Zinc, as this element has some EDS bands close to that of Rhenium. I am certainly willing to analyze more EDS spectra or SEM micrographs that Vogel or the lab in Switzerland might have produced on these samples, if they are brought to my attention. What should not be done is to take Vogel’s or any other scientist’s word alone to validate any conclusions.

* This is a guest post by Ivan Alvarado. Ivan is not affiliated with Open Minds, and the ideas, statements, and opinions expressed in this article do not necessarily reflect those of Open Minds.

Ivan Alvarado obtained his PhD in Electrical Engineering from UCLA. For over 10 years he has collaborated in multiple research programs in both academy and industry, all of them in the area of nano-scale fabrication for electronics and photonics. His areas of expertise are Electron Beam Lithography, Scanning Electron Microscopy, EDS Microanalysis, and Atomic Force Microscopy. He is a currently an active member of the Independent Investigations Group in Hollywood, California.